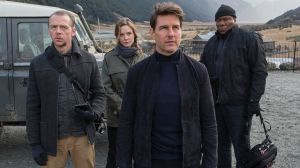 While some studios are moving release dates of their big blockbusters up this year as the COVID-19 vaccine rollout continues to show progress towards a New Normal, Paramount Pictures is moving in the opposite direction. Top Gun: Maverick, which had been poised to have a big Fourth of July weekend this summer, is being pushed back to November 19th while Tom Cruise’s other big franchise play for Paramount, Mission: Impossible 7, is being delayed all the way to 2022.

A specific reason was not given for the change, and it comes as Paramount Pictures is shifting the release dates for a number of its films. But one reason could be that, while the COVID-19 situation is improving in the United States, the vaccine rollout has been rockier in other countries where films like Top Gun 2 and Mission: Impossible stand to recoup big box office receipts. As France heads into another lockdown, Paramount is hedging its bets and waiting until the entire world is ready to surge the box office of Tom Cruise’s two highly anticipated sequels. And unlike Warner Bros. or Disney which have Marvel and DC franchises on the horizon, Paramount really can’t afford to leave money on the table.

Top Gun: Maverick is directed by Joseph Kosinski and sees Cruise reprising his iconic role as Maverick. The film takes over the release date originally set for Mission: Impossible 7, as the Mission sequel will now hit theaters on May 27, 2022. That’s a significant delay for the sequel, but writer/director Christopher McQuarrie is not likely complaining. He’s hard at work still filming the Mission follow-up, which he’s shooting back-to-back with Mission: Impossible 8.

There had been questions over whether Cruise’s press commitments for Top Gun: Maverick would impact the shooting schedule of the Mission sequels this summer, and with the release date delays on both movies, that’s likely no longer an issue. While I’m bummed we have to wait even longer (especially for Mission), I’ll be thrilled to see both of these movies in a theater.