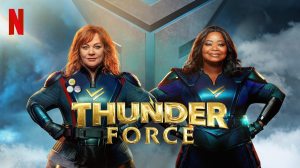 Synopsis – In a world where supervillains are commonplace, two estranged childhood best friends reunite after one devises a treatment that gives them powers to protect their city.

My Take – While the superhero genre continues to expand by paving a path for a more grounded approach unlike its previous power-fantasy escapism, with fresher narratives being uses to tell tales about the dramatic aspects of humanity, the genre continues to remain ripe for satirical takes, despite the massive successes both the Deadpool films have been.

Hence it came as good news when it was announced that Melissa McCarthy, who has previously demonstrating her abilities to skewer action and comedy efficiently in both The Heat (2013) and Spy (2015), would be starring in a Netflix original with a fresh take.

Unfortunately, to do that she also brought along with actor/director husband Ben Falcone to helm their fifth collaboration. Hence, keeping in mind the trend of their previous duds like Tammy (2014), The Boss (2016), Life of the Party (2018) and Superintelligence (2020), this latest is also another piece of pointless, absurd comedy, featuring unbearably dry, forced humor, besides a forgettable story. In a weak attempt to cash in on the ever-popular superhero trend, here director-writer Falcone just dutifully hit every cliché without any meaning to them.

Honestly, I don’t know what’s worse: witnessing McCarthy and Octavia Spencer waste their exceptional talents in a substandard film or seeing major studios continue to give opportunities to filmmakers like Falcone. Sure, both McCarthy and Falcone are two undeniably funny people, and yet their films are marked by a flagging joke density and few moments that break the chuckle barrier. They seem built around a basic premise and McCarthy’s talents with nothing else inside them.

The best compliment I can give this Netflix film is that it doesn’t mislead anyone, in the sense, it’s precisely what viewers expect it to be, and feels like almost every other Ben Falcone directed, Melissa McCarthy-starring vehicle.

The story follows Lydia Berman (Melissa McCarthy) and Emily Stanton (Octavia Spencer), two primary school best friends who reunite in their middle age under unforeseeable circumstances. Back in the 1980s, a few cosmic rays struck Earth, causing some humans to develop superpowers. However, these powers only occurred in those predisposed to being sociopaths. Thus, the world ended up with many supervillains, called Miscreants, and no superheroes. In one of these attacks Emily ends up losing her geneticists parents, who were working toward a way to imbue normal people with powers as a way to combat the Miscreants. Hence, Emily made it her life’s ambition to finish what they started, and falls out with Lydia when she concurs that her laid-back buddy is dragging her down.

Now years later, Lydia is a forlorn and seemingly friendless forklift driver, and Emily is the head of a thriving tech corporation on the brink of achieving that goal, alongside her brilliant 15-year-old daughter Tracy (Taylor Mosby) and their ex-CIA enabler Allie (Melissa Leo). That is until, Lydia manages to blunder in and insert herself into the process, gaining super strength, leaving Emily to take the serum of invisibility. Yet, keeping their differences aside, the two are determined to defend the city of Chicago from villains like The King (Bobby Cannavale), Laser (Pom Klementieff) and The Crab (Jason Bateman).

Thought the action sequences and special effects aren’t too shabby, like director Falcon‘s previous films, it relies heavily on the lowest of lowbrow comedy: pratfalls, gross-out gags, protracted humiliation scenarios, and McCarthy’s character being clumsy and clueless. Shortly after she starts getting dosed with superhero serum, her metabolism shifts until the only food she craves is raw chicken, and director Falcon returns several times to the literal gag of her cramming glistening pink gobbets into her mouth.

Even the plot is as generic and predictable as it could be in a film that makes no effort in trying to do something remotely different than what viewers have seen for the last couple of decades. The film just drags on from the naming of the team, to how smelly their costumes can get, to a potential romance between Lydia and The Crab, with very few jokes actually landing anywhere near funny territory like the gag about have two middle-aged, actors scrap with bad guys is a treat, even if scenes of them huffing and puffing as they squeeze into a tiny purple Lamborghini is played for laughs a little too long. 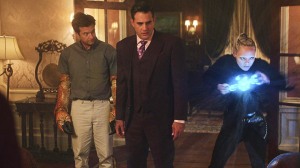 There’s also the theme of two women who are complete opposites somehow managing to complement each other and learning to appreciate what the other offers to their friendship. Ultimately, Falcone isn’t a particularly effective writer or director of comedy. His style is to simply leave the camera on McCarthy and pray she elevates the script beyond its mediocre text. It barely works for a scene or two, but, ultimately, the plot and writing are still lazy and lifelessly performed, even by gifted actors, plain and simple.

The most frustrating aspect of all of this is watching Melissa McCarthy and Octavia Spencer, two outstanding actresses with five Oscar nominations combined, working on a hopeless project such as this one. Spencer’s performances usually come from a calm, steady, down-to-earth place, and she logs a lot of thankless time in the film as McCarthy’s straight-faced comedy foil. The snob-and-slob routine is a classic comedy pairing, but in this case, it mostly feels like McCarthy is having all the fun, while Spencer is stuck with the job of humorlessly reining her in. Some of the funniest moments occur either when she isn’t around to play killjoy, or when Spencer is allowed her own meek gags, like her muttered, defiant protests that she, too, is a fun person.

Thankfully the villains have a better hand. Bobby Cannavale is so charismatic that he makes nearly all his gags as politician William “The King” Stevens work, despite being pretty underwritten. Similarly, Pom Klementieff as the Miscreant “Laser” doesn’t have the most developed character, but she finds just enough strangeness in her performance to earn a giggle here and there.

However, the most shining performance comes from Jason Bateman. Affixed with large crab hands, Bateman doesn’t just rely on easy physical comedy to make himself funny. His dastardly crustacean lays on the charm as he tries to woo the super strong Lydia. A romantic dinner date that ends in butter play stands out as the highlight of this rather standard film. Unfortunately, in supporting roles, Taylor Mosby, Melissa Leo, Tyrel Jackson Williams and Kevin Dunn are largely wasted. On the whole, ‘Thunder Force’ is a bland, unfunny superhero comedy that is just another addition to the forgettable films list from the married duo.