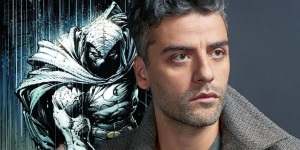 The upcoming Disney+ showMoon Knight will see Oscar Isaac put to the test as he portrays the martial arts-oriented superhero. In an Instagram post by his production company, Mad Gene Media, the actor is seen practicing some intense action sequences that show just how brutal the series will be.

The video in question features Isaac performing a bevy of crazy stunts that look like they belong in a John Wick film. The brutality of the fighting is very apparent within seconds of the clip, with Isaac stabbing nearly all of his enemies to ensure they don’t get back up. It’s the second post from his production company to include his extensive stunt training after fans first saw him in action back in March. Both videos showcase the level of dedication the A-lister is giving to the Disney+ series, which focuses on a superhero that possesses moon-based powers and fights crime in New York while struggling with Dissociative Identity Disorder.

In the comics, Moon Knight, a.k.a. Marc Spector, is a former Marine and CIA operative who was betrayed by partner Bushman. Near-death, Spector is greeted by the Egyptian moon god Khonshu, and becomes his avatar on earth known as “The Fist of Khonshu.” Moon Knight takes on many personalities during his tenure in the comics, allowing for Isaac to really stretch his acting abilities in a superhero property after his disappointing role as the villain in X-Men: Apocalypse.

Egyptian filmmaker Mohamed Diab is set to direct the upcoming series when production starts sometime this June, with Ethan Hawke set to play the primary antagonist and May Calamawy (Ramy) cast in an undisclosed role. Plot details are non-existent, but it’s known that the series will take place over six 40 to 50-minute episodes, replicating the formula set by The Falcon and the Winter Soldier. The series will be spearheaded by showrunner Jeremy Slater (The Umbrella Academy) and produced by Kevin Feige.

Moon Knight is expected to land on Disney+ in 2022. Check out Isaac‘s latest training video below: