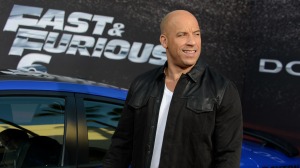 Vin Diesel is set to star in and produce a live-action feature version of the tabletop boxing game Rock ‘Em Sock ‘Em Robots.

Mattel Films is behind the project and is partnering with Universal, the studio behind Diesel‘s beloved Fast & Furious franchise.

Ryan Engle, the writer behind Dwayne Johnson starrer Rampage, penned the screenplay for the action-adventure, which follows a father and son who form an unlikely bond with an advanced war machine.

Diesel and Samantha Vincent will produce via One Race Films. Kevin McKeon will oversee the project for Mattel.

Mattel is in the works on live-action adaptations of their other game and toy IPs, including Barbie, Barney, Hot Wheels and Magic 8 Ball. With Universal, the company is developing a feature version of the popular 90s tv series Wishbone.