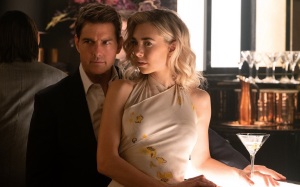 Mission: Impossible 7 director Christopher McQuarrie posted a photo on his Instagram showing Tom Cruise hanging from a speeding train. To Mission: Impossible fans, this looks like business as usual for Cruise and his interest in doing his own stunts.

“What would Mission be without a bit of local color? Our sincerest thanks to North Yorkshire Moors Railway, the Office for Road and Rail, Eddie Draper, Riley’s & GB Rail Freight and, of course, the incredibly lovely and welcoming people of Levisham. We had an amazing week (and remarkably fair weather) in fabulous Yorkshire. We’ll be back for one last bit of mischief in short order.”

Mission: Impossible 7 will mark McQuarrie’s third time helming a film for the franchise. Paramount Pictures clearly loves what they’ve been seeing between the McQuarrie and Cruise team up, as McQuarrie is already signed on to direct the 8th film as well. Fans should be excited, as the latest films in the series have not only been crushing at the box office, but also garnering heaps of critical praise.