Synopsis – A man refuses all assistance from his daughter as he ages. As he tries to make sense of his changing circumstances, he begins to doubt his loved ones, his own mind and even the fabric of his reality.

My Take – Having seen my grandfather struggle with dementia (Alzheimer’s disease) in the last few years of his life, I understand the difficulties and horrors the mental disability causes to the patient and the families dealing with it. After all, what can be more confounding than forgetting the face of a loved one, a basic understanding of time, and most importantly, one’s own identity?

Though the illness has been tackled previously in various acclaimed films like Amour (2012), Still Alice (2014) to name a few, the reason that this film adapted by French playwright and first-time director Florian Zeller from his own 2014 play, Le Père, immediately stands out from the rest is because it brilliantly imagines the characteristics of this debilitating form of mental atrophy by sucking the viewer inside the character’s mind, and sending them into an unprepared emotional free-fall.

Despite being a 97-minute long chamber piece, the film twists and turns in so many unexpected ways, that it just keeps us engaged till the very end, all the while forcing us to ponder over the suffering of feeling so lost and hopeless.

Sure, generally films adapted from stage plays can feel very confined and unnatural on the screen, however, here director Zeller does a great job at expanding the world without any camera trickery of any sort but by keeping a tight grip on the narrative and by extracting a dominating performance from Sir Anthony Hopkins, which has already garnered him his second Best Actor award at the 93rd Academy Awards.

The story follows Anthony (Anthony Hopkins), an 80-year-old Welshman, who has always been fiercely independent, and despite his age continues to live alone in a charming London flat, much to the chagrin of his adoring daughter, Anne (Olivia Colman). Mainly as Anthony is suffering from dementia, forcing Anne to grapple with the stark reality that her father’s mind is slowly slipping away. However, Anthony dismisses her concern as quickly as he belligerently dismisses the at-home caretakers Anne continues to hire to look after her father.

Things begin to get more dire for Anthony when Anne informs him of her plans to move to Paris with her new boyfriend and relocate her father into an aged-care facility, making him feel abandoned, but the next time Anne appears, she’s a completely different woman (Olivia Williams), though still claiming to be his daughter, which causes Anthony to spiral into a state of panicked confusion, as newer faces and conditions keep coming his way.

The film explores Anthony’s escalating disorientation through a non-linear narrative, a seamless mix of imagined and actual encounters, and the recurrence of events and conversations. As I mentioned above, much of the film is seen through Anthony’s eyes, nudging viewers to understand what it means to lose the ability to relate to regular life.

Though the film starts off quite lively with Anne confronting Anthony for chasing off the last assistant, who he claims stole his watch. At first, we are able to chuckle about the situation, but we soon become just as confused as Anthony. Especially when he stumbles upon a man in his flat who claims to be married to his daughter. He waits for Anne to return from the store to sort things out, but when she arrives, she is a different woman entirely.

Here, director Zeller consistently meddles with tone and reality by constantly shifting the nature of Anthony’s world, purposely making it a jarring experience for the viewer where we can’t help but question practically everything presented before us. Anthony’s confusion, frustration, and terror are equally shared by the viewer, creating an intimately harrowing experience that’s unlike anything you’ve seen before. 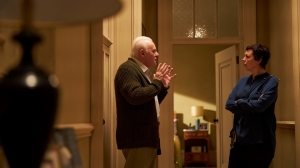 Director Zeller disorients Anthony and the audience by having different actors play the same characters, then switching back. He rearranges the same apartment, so we are unsure where we are-Anthony’s apartment or Anne’s. Anthony tells different versions of his career, and we even seem to experience events out of order. The only thing we are certain of is that they don’t even speak English in Paris! It’s an ingenious technique to place us firmly in the terrifying state of mind that is dementia. Confusion and shocks consistently permeate Anthony’s life, and director Zeller allows his audience to feel every agonizing moment with his protagonist.

Never has the anarchy of memory loss been conveyed in such a remarkable fashion, and the result is nothing short of unsettling like being trapped within a psychological horror film you can’t escape from, which is entirely how it must feel to suffer a debilitating mental illness like dementia.

Sure, it may feel stagey at times, as films based on plays often feel, but it almost works for the effect that director Zeller is going for. With the devastating final act allowing one to finally crash into reality with Anthony Hopkins delivering some of the greatest work seen on screen.

Yes, I too like most was hoping the late Chadwick Boseman would pick up his posthumous Oscar for his electrifying turn in Ma Rainey’s Black Bottom, however, Sir Hopkins truly deserved his win, as his masterful control of minor expressions and vocal nuance intensified the whole film. To see an actor of 82 deliver such a stunning performance; one that’s essentially an endurance test of the mind is genuinely breathtaking.

We know he can play cantankerous, intense characters with his hands tied behind his back, but he’s asked to offer something wildly different here, particularly in the latter stages of the narrative when the once-proud father gives way to a terrified, vulnerable shell of a man. Especially in the end when he cries asking for his mother who is obviously dead a long time ago. It’s hard to imagine anyone can best what Sir Hopkins achieves here.

In a supporting roles, the ever-reliable Olivia Colman offers a heartbreaking turn as Anthony’s forlorn daughter, and manages to steals focus with her own scenes, brimming with heartfelt, intimate tragedy that’s truly painful to watch. In smaller roles, Imogen Poots, Rufus Sewell, Olivia Williams, and Mark Gatiss are equally effective. On the whole, ‘The Father’ is a great devastatingly, heartbreaking film anchored by Anthony Hopkins‘ brilliant performance.