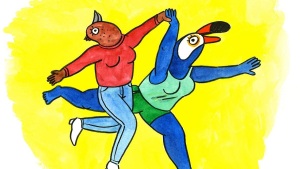 The first episode of Tuca and Bertie’s 10-episode second season has been given an official release date of Sunday, June 13th. The adult animated series starring Ali Wong and Tiffany Haddish originally aired over at Netflix, but was canceled after just one season before being picked up by Adult Swim, where season two will air. The series is created by Lisa Hanawalt and produced by Michael Eisner’s The Tornante Company.

A clip was released for this offbeat comedy’s sophomore season about two bird-women back in March, which featured a dual narrative. In the first half of the clip, Bertie explains to her therapist how she feels like a haunted house, but all the shrink wants to do is watch videos of pottery fails. In the second half of the clip, Tuca invites several potential suitors onto a bus for a potentially wild ride. Based on this one clip, it’s safe to say this new season of Tuca and Bertie will be as wild as ever. Along with Wong and Haddish, Tuca and Bertie features the voice talents of recent Oscar-nominee Steven Yeun, as well as Richard E. Grant and Nicole Byer.

While Netflix didn’t think a second season of the slice-of-life animated series was in the cards, fans are ecstatic that the show has found new life at Adult Swim. In recent times, this is not the first time a Netflix show was picked up by another network after it was already canceled. In March of 2019, the Netflix reboot of One Day at a Time was canceled, before being picked up for a fourth season by Pop.

That series was again canceled by Pop after the fourth season aired, but considering the buzz around Tuca and Bertie’s revival, it would be hard to imagine this animated sitcom would suffer the same fate. Tuca and Bertie will premiere in less than two months, and it wouldn’t be surprising if it becomes one of Adult Swim’s most-watched shows. Season one is currently available to stream on Netflix. You can watch the sneak peek below.