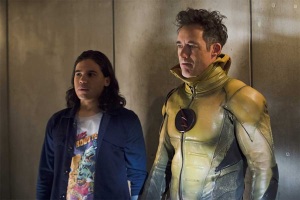 Barry Allen just lost his Harrison and Cisco as original cast members Tom Cavanagh and Carlos Valdes are exiting the CW series The Flash. The show, which has followed Grant Gustin’s Barry Allen through multiple universes and iconic flash storylines, was recently renewed for an eighth season, but both Cavanagh (who has played multiple characters throughout the series as well as the Reverse-Flash) and Valdes will not be joining him any longer.

According to Deadline, Cavanagh wrapped up his storyline in the third episode of Season 7, titled “Mother,” and stayed on through the rest of the season as a recurring guest star. With his departure and Valdes also leaving the show, that takes the original cast members of the hit show down to four.

Executive producer and showrunner Eric Wallace had this to say about their departure, in a statement to Deadline: “Tom and Carlos have been an integral part of our show for seven seasons, and will be greatly missed. Both are incredible talents who created beloved characters that fans and audiences around the world have come to love. Which is why we are happily keeping the door open for return appearances.”

The original cast members still on the show are Gustin, Candice Patton, Danielle Panabaker, and Jesse L. Martin. Gustin is already signed on for season 8 and will return as Barry Allen while the other three are in new negotiations to come back to the show. It is bittersweet for fans of the series to know that there are only four of the remaining team still around. Sure, it’s not the end all be all for Cavanagh and Valdes, but it’s still not the same show that started all the way back in 2014.

Who knows what the future holds for Barry Allen, Iris West, and the other members of Team Flash at S.T.A.R. Labs but at least it doesn’t seem as if the door is completely closed on Cavanagh or Valdes.