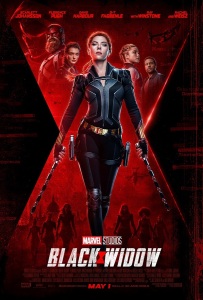 As we’re slowly inching along to the long-awaited release of Black Widow, Marvel Studios just released new character posters ahead of the film’s summer premiere. We’ve already been graced with a couple of trailers, but these posters allow us to really dig into the characters and their costuming. We also get a great look at Taskmaster, although we still have no idea who is playing the formidable adversary.

Black Widow will follow the titular avenger as she explores a dangerous conspiracy that is tied to her past. To confront and defeat these forces, Natasha Romanoff must deal with her contentious history and work with some of her most difficult allies yet — her ragtag family. Keeping with the appropriate Marvel timeline, Black Widow is set after Captain America: Civil War but before Avengers: Infinity War. Scarlett Johansson reprises her role as Natasha, joined by Marvel Universe newcomers Florence Pugh, David Harbour, O-T Fagbenle,  and Rachel Weisz.

In the new posters, we do get another look at Johansson as Black Widow, but the other characters are certainly the shiny new objects that steal our attention. Weisz looks fantastic as Melina, another Black Widow who serves as a mother figure to Romanoff, and therefore dons the same costume as Johansson. Pugh also looks amazing as Yelena, Romanoff’s sister-figure, trained in the same Red Room as her. Rounding out her family is Harbour’s Alexei aka Red Guardian, Russia’s eastern answer to Captain America. We also get a better look at Fabgenle as Rick Mason, an ally from S.H.I.E.L.D. who serves as a romantic interest for Romanoff (one that will hopefully sizzle on screen a bit better than Bruce Banner).

Finally, the Taskmaster gets their own poster as well, even if their identity has not yet been revealed. The costuming portrays a daunting foe for Romanoff and company, including heavy body armor and…a shield, a replica of Captain America’s. His character is known for his “photographic reflexes,” which means that he can copy fighting styles, and has plenty of previous knowledge and weapons to back up his abilities. Despite the long list of villains that have appeared in previous movies, Marvel still has a plethora of great characters to pull from, and the Taskmaster is certainly a great one to unearth due to their mimicry styles.

Black Widow heads to theaters and Disney+ with Premier Access on July 9. Check out the new posters below.

Check out the brand-new character posters for Marvel Studios' #BlackWidow. Experience the film in theaters or on @DisneyPlus with Premier Access on July 9. Additional fee required. (2/6) #YelenaBelova pic.twitter.com/3biBieAsly

Check out the brand-new character posters for Marvel Studios' #BlackWidow. Experience the film in theaters or on @DisneyPlus with Premier Access on July 9. Additional fee required. (4/6) #AlexeiShostakov pic.twitter.com/MynsgsKJFd

Check out the brand-new character posters for Marvel Studios' #BlackWidow. Experience the film in theaters or on @DisneyPlus with Premier Access on July 9. Additional fee required. (6/6) #RickMason pic.twitter.com/PaCgdARm4s