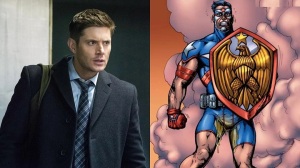 The Boys showrunner and writer Eric Kripke recently tweeted a picture of Jensen Ackles standing outside a trailer labeled “Soldier Boy” on the set of the Amazon original. The tweet pays homage to Ackles’ most recognized work, Supernatural, while also publicly welcoming him to a new super-themed tale — one a bit grittier and grotesque than his former outing.

Soldier Boy is a character whose comic book history is a bit of an enigma. Yet, back in 1944 — when Dr. Vought had already perfected practical applications of Compound V — Soldier Boy was injected. He then went on to kill German soldiers in mass quantities. Soldier Boy remained a primary hero working under Vought International for quite some time, and even crossed paths with the now-dead Lady Liberty (Stormfront). After fighting in World War II, he became the first superhero whose battlefield successes catalyzed and cemented a celebrity presence.

Kripke previously had this to say about his role on The Boys season 3.

“When I was a child, I had a crazy, impossible dream — to provide Jensen Ackles with gainful employment. I’m happy to say that dream has come true…Jensen is an amazing actor, an even better person, smells like warm chocolate chip cookies, and I consider him a brother. As Soldier Boy, the very first Superhero, he’ll bring so much humor, pathos, and danger to the role. I can’t wait to be on set with him again, and bring a bit of Supernatural to The Boys.”

Amazon has yet to provide an official release date for season 3, but filming is well underway and viewers will want to see Ackles in the infamous “herogasm” scene that has been approved for the upcoming season. Be sure to check out Kripke’s tweet below.