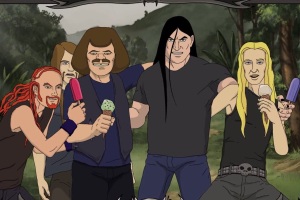 Adult Swim just made a lot of fans happy by announcing movie adaptations of some of its biggest successes: Aqua Teen Hunger Force, The Venture Bros. and Metalocalypse. The three titles rank amongst the oldest and most beloved original productions from Adult Swim, and the new movies will be sequels to the original series, all of them finished years ago.

For those who need refreshment, Aqua Teen Hunger Force follows a group of so-called superheroes shaped like fast food items, who never really fight crime. Created by Matt Maiellaro and Dave Willis, the adventures of Master Shake, Frylock and Meatwad premiered with the official launch of Adult Swim in September 2001. The show ran for 11 seasons before being canceled. 2007’s Aqua Teen Hunger Force Colon Movie Film for Theaters became Adult Swim’s first theatrical release, which underlines the importance of this franchise for adult animation.

Created, written and executive produced by Jackson Publick and Doc Hammer, The Venture Bros. follows a dysfunctional family inspired by Jonny Quest.  The series aired 7 seasons and 4 specials between 2003 and 2018, making it one of the longest-running Adult Swim franchises.

As for Metalocalypse, the short-lived four-seasons show not only gathered a legion of fans with the brutal adventures of a metal band, but actually released four successful metal albums with the songs written for the series. The four albums combined sold more than 1 million copies, making Metalocalypse a hit also in the music scene. The movie soundtrack will be released on WaterTower Music, adding a fifth album to the fictional band discography. The new movie brings back original creators Brendon Small and Tommy Blancha.

There’s still no release date for any of the highly anticipated (yes, now they are!) movies, but all three titles are set to release on DVD/Blu-Ray, VOD and electronic sell-through for a 90-day exclusive window, before becoming available both at HBO Max and Adult Swim.

Check the synopsis for the Metalocalypse movie below:

“The power-hungry TRIBUNAL unveils their secret and deadly “Falconback Project” as the world grows in embattled chaos and the menacing Doomstar breaches the Earth’s atmosphere while the mysterious and twisted dissent of a band member threatens the future of Dethklok. Picking up directly after the heroic rescue of Toki Wartooth: Can Dethklok choose between their egos and the greater good of the world to embark on a gauntlet of dangers that will try their very souls and finally write the song that will be their salvation?”

Now, check the synopsis for The Venture Bros. movie:

“Doc’s latest invention will either bankrupt the Ventures or launch them to new heights, as Hank searches for himself, Dean searches for Hank, The Monarch searches for answers, and a mysterious woman from their pasts threatens to bring their entire world crashing down on them.”

“A continuation of the hit animated series, fans will find out what happens next with Frylock, Meatwad and Master Shake, who consider themselves crime fighters, but the truth is they never fight crime. Aqua Teen Hunger Force is created by Matt Maiellaro and Dave Willis and follows the strange everyday lives of three human-sized food products living in New Jersey.”