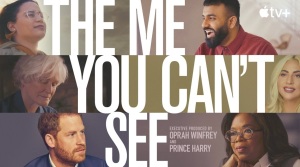 The first trailer for The Me You Can’t See, from executive producers Oprah Winfrey and Prince Harry, has dropped today. Offering a glimpse into the mental health struggles of many celebrities through candid conversations, the documentary series will premiere on Apple TV+ later this month.

Together, Winfrey and Prince Harry will guide audiences through honest discussions about their own well-being, along with insight from seasoned experts and various mental health advocates. The Me You Can’t See will include conversations with Lady Gaga, Glenn Close, NBA players DeMar DeRozan and Langston Galloway, chef Rashad Armstead, and more.

The Me You Can’t See comes on the heels of Winfrey’s bombshell conversation with Prince Harry and Meghan Markle this past March, which leveraged allegations against the Royal Family of racism and cultivating an unhealthy atmosphere for the couple’s mental health. Winfrey and Prince Harry will seemingly continue a similar conversation about the larger stigma that still exists in regards to mental health. While that conversation has become increasingly more common and more welcomed, mental health is something that cannot be talked about enough. Hearing from a vast cast of celebrities, athletes, doctors, business owners, actors, poets, refugees, and more will not only continue to show how prevalent those struggles are, but also how valid it is to feel however you feel.

The Me You Can’t See is the latest release in Winfrey’s ongoing relationship with Apple TV+. The series will be available alongside the NAACP Image Award-nominated for Outstanding Talk Series, The Oprah Conversation, Oprah Talks COVID-19, and Oprah’s Book Club. RadicalMedia’s Jon Kamen, Dave Sirulnick, and Alex Browne will serve as showrunners for the latest documentary series, while Emmy Award and Spirit Award nominee Dawn Porter and Academy Award and four-time BAFTA Award-winner Asif Kapadia will direct.

The Me You Can’t See will premiere May 21 on Apple TV+. Check out the trailer for the series below: