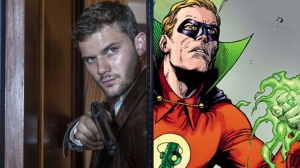 HBO Max is reportedly in talks to bring Jeremy Irvine as Alan Scott in the upcoming Green Lantern series. The news comes from Variety, but so far HBO Max declined to comment.

If the cast is confirmed, Irvine would join Finn Wittrock’s Guy Gardner, set to lead the upcoming series. Alan Scott is a key character in the Green Lantern series, not only for his history as a hero, but also because he’s one of the few DC heroes to be openly gay in the comics, making Green Lantern a perfect opportunity for Warner Bros. to bring more diversity to their superhero blockbuster production. Casting Irvine would be an interesting choice since the actor played the lead in the lead role in 2015’s Stonewall, a film about the inception of the LGBT+ movement as we know it today. Plus, a strong gay character would probably do some good for the series, as Guy Gardner is already described as “a hulking mass of masculinity” and a “cocky alpha male”.

Alan Scott is the original Green Lantern, both in comics continuity as in DC’s publication history, making him one of the most prominent heroes to ever carry the Green Lanterns ring. Having debuted in the 1940’s “All-American Comics #16”, Alan Scott is also one of the oldest DC characters to come to life.

Scott was one of the main members of the Justice Society of America, the precursors of the Justice League, who’ll premiere in theaters when Black Adam gets released on July 29, 2022. Warner Bros. didn’t inform if the upcoming Green Lantern series will be a part of the DC’s movie continuity or if it’ll act as a standalone property, but since they are working in a new interconnected universe, Alan Scott could bridge Green Lantern with other DC properties.

Green Lantern is being executive produced by Greg Berlanti, Marc Guggenheim, and Seth Grahame-Smith, with Grahame-Smith acting as the showrunner. This is a bold choice by HBO Max, as Berlanti and Guggenheim had writing credits in 2011’s much-despised Green Lantern movie starring Ryan Reynolds. The story will span decades and cross galaxies, bringing both already-known Lanterns and new characters. There’s still no set date for Green Lantern to start production.