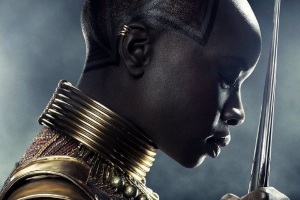 Get ready to see a whole lot more of Danai Gurira in the MCU, as the actress has closed a deal to reprise her role as Okoye in the upcoming Black Panther spinoff series coming to Disney+ as well as Ryan Coogler‘s upcoming sequel Black Panther: Wakanda Forever.

The hot casting news was first tipped by the Hollywood Reporter in a list of top entertainment attorneys, though Collider has since confirmed it with sources close to the project. Representatives for Disney and Marvel had no comment.

The untitled Black Panther TV series, which will be set in the kingdom of Wakanda, hails from Coogler‘s Proximity Media banner. Plot details remain under wraps, but the ancient high-tech society provides fertile ground for a scripted series, and though it’s unclear who will be joining Gurira on the show, Okyoe’s involvement is a great start.

“Ryan Coogler is a singular storyteller whose vision and range have made him one of the standout filmmakers of his generation. With Black Panther, Ryan brought a groundbreaking story and iconic characters to life in a real, meaningful and memorable way, creating a watershed cultural moment. We’re thrilled to strengthen our relationship and look forward to telling more great stories with Ryan and his team,” Disney‘s Bob Iger said in a recent statement when Coogler‘s Disney deal was announced.

Coogler is currently hard at work on the Black Panther sequel, which will not recast the title character in the wake of the tragic, untimely death of star Chadwick Boseman. That Marvel movie is currently set to hit theaters on July 8, 2022, and Proximity is eager to expand the story on the small screen. Coogler‘s collaborators include his wife, Zinzi Coogler, as well as Sev Ohanian, Archie Davis, Peter Nicks and composer Ludwig Göransson.

Gurira played Michonne on The Walking Dead before joining the Marvel universe, and she returned as Okoye in Avengers: Infinity War and Avengers: Endgame. She’s also attached to play Shirley Chisholm in an upcoming biopic.