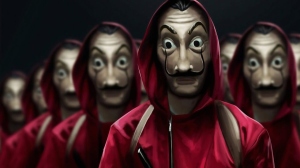 As we get ready to say goodbye to Money Heist (La Casa de Papel), Netflix has revealed the first official images from the last season. After the first teaser, we already know the heist is turning into a war, and these new photos certainly reinforce that.

At the end of Part 4, the group of bank thieves lead by The Professor (Álvaro Morte) is still trapped inside the Bank of Spain, while trying to get out alive of a really complicated situation. The conflict with the police forces should only escalate in Part 5, as the official synopsis teases the presence of the army.

While most of the images show the group of thieves ready for combat, one of the new photos is worrisome, as it shows the group surrendering themselves to an unseen person or group. We also have a new image of Alicia Sierra (Najwa Nimri) pointing a gun at The Professor.

Part 5 of Money Heist will be split into two halves of five episodes. The first five episodes will be available on Netflix on September 3, with the five remaining episodes coming on December 3. Check out the new images and the synopsis below.

“The gang has been shut in the Bank of Spain for over 100 hours. They have managed to rescue Lisbon, but their darkest moment is upon them after losing one of their own. The Professor has been captured by Sierra and, for the first time, doesn’t have an escape plan. Just when it seems like nothing else could go wrong, an enemy comes on the scene that is much more powerful than any they’ve faced: the army. The end of the greatest heist in history is approaching, and what began as a robbery will turn into a war.”

Prepare for the final battle