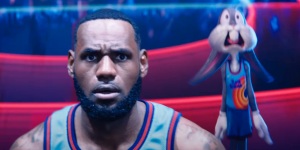 ESPN has decided to give Space Jam: A New Legacy the documentary treatment with the release of “The Bunny & The GOAT,” a special 30 for 30 episode about the epic game featuring LeBron James and the Tune Squad. While the 30 for 30 documentary series usually focuses on real-world events that shaped the history of the sport, “The Bunny & The GOAT” is a funny parody of the format that doubles down as one of the best pieces of the Space Jam sequel’s already great marketing campaign.

The special 30 for 30 episode features James himself talking about the game with the Tune Squad as a past event that he defines as “easily the biggest challenge of my career.” By using the documentary format, the special episode also interviews some of the cast of Space Jam: A New Legacy while they’re still in character. That includes Don Cheadle, who plays the evil algorithm Al G. Rhythm — well, “sinister”, as he doesn’t like being called “evil.”

By mixing animation and live-action, the 30 for 30 episode gives the spotlight to some of the animated cast of Space Jam: A New Legacy by allowing the Tunes to explain the obstacles the team had to face while trying to work together. From the tone of the interviews, James will have to deal with the egos of Bugs Bunny and Daffy Duck, as well as the quirks of all the crazy members of the Looney Tunes.

Directed by Malcolm D. Lee, Space Jam: A New Legacy premieres in theaters and on HBO Max on July 16. Check out “The Bunny & The GOAT” below: