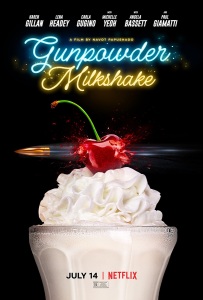 With a little more than a month until the release of Gunpowder Milkshake, Netflix has revealed a new clip from the film focused on the Librarians, a trio of women that runs a secret weapons market inside a library.

In the clip, Librarian Madeleine (Carla Gugino) leads an unidentified woman into the library, in order to introduce her to her colleague Anna May (Angela Bassett). Madeleine explains that the young woman wants to open an account with them, while Anna May says that they shouldn’t accept new readers without recommendations. It’s obvious they are using veiled language while trying to decide if they should let in this woman or get rid of her. The third Librarian, Florence (Michelle Yeoh), is called to offer a tie-breaker, as the mysterious woman is revealed by the camera as the protagonist Sam (Karen Gillan).

Gunpowder Milkshake will have Sam fighting to keep eight-year-old Emily (Chloe Coleman) – a target that Sam refuses to kill – alive. This makes the duo fugitives from the dangerous assassin organization known as The Firm. To survive, Sam will need to get the help of the Librarians and her mother Scarlet (Lena Headey), a retired assassin she cut ties with a long time ago. The movie’s trailer brings a lot of John Wick energy, promising memorable action-packed set pieces.

Directed by Navot Papushado from a script he co-wrote with Ehud Lavski, Gunpowder Milkshake is coming to Netflix on July 14. Check out the new clip and synopsis below.

“Sam was only 12 years old when her mother Scarlet, an elite assassin, was forced to abandon her. Sam was raised by The Firm, the ruthless crime syndicate her mother worked for. Now, 15 years later, Sam has followed in her mother’s footsteps and grown into a fierce hit-woman. But when a high-risk job goes wrong, Sam must choose between serving The Firm and protecting the life of an innocent 8-year-old girl – Emily. With a target on her back, Sam has only one chance to survive: Reunite with her mother and her lethal associates, The Librarians. These three generations of women must now learn to trust each other, stand up to The Firm and their army of henchmen, and raise hell against those who could take everything from them.”

Hunch smunch. These women do things by the book 📚

Fresh out of #GeekedWeek here's a brand new clip from GUNPOWDER MILKSHAKE, coming to Netflix in the US on July 14th. pic.twitter.com/5KdnfGCepg