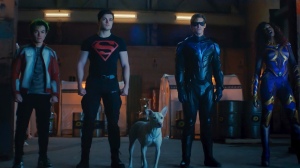 All the way back in the yesteryear of 2018, I wrote Titans “lands just about as gracefully as The Flying Graysons,” which might be the meanest thing I’ve ever written about…anything, but over the years the dark DC Comics series really has come into its own. So it’s with genuine excitement I present the first teaser trailer for season 3, which not only welcomes us back to one of the grittiest Gothams ever put on screen, but also reveals we’re getting yet another live-action Joker.

Look, normally I’d say we need another live-action Joker like we need a crowbar to the skull—two different men have won an Oscar playing Batman’s homicidal clown archnemesis—but if Titans wants to go all-out weird with it, let’s give a tentative benefit of the doubt. (Going by the trailer, it looks like the show is adapting the comic book storyline that saw Joker murder the crap out of Jason Todd.) Season 3 is already shaping up to be mighty busy. Back at DC Fandome, it was confirmed Curran Walters‘ Todd would be assuming the Red Hood mantle, followed shortly by the news that Mad Men alum Vincent Kartheiser is playing Batman’s most fear-obsessed foe, Scarecrow.

Titans follows a crew of young superheroes across all of DC Comics properties as they come to terms with their own crime-fighting careers. The series also stars Brenton Thwaites as Nightwing, Anna Diop as Starfire, Teagan Croft as Raven, Ryan Potter as Beast Boy, Conor Leslie as Wonder Girl, Joshua Orpin as Superboy, and Alan Ritchson as Hawk. Jay Lycurgo joins the cast for season 3 as Tim Drake.

Check out the trailer below. The first three episodes of Titans season three will premiere on HBO Max on Thursday, August 12 with a new episode launching weekly every Thursday through October 21.