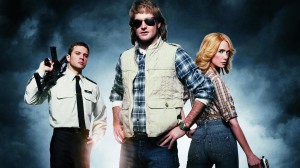 Will Forte posted a set photo to Instagram recently in order to hype up the upcoming MacGruber TV series coming to Peacock soon.

MacGruber started out as a recurring Saturday Night Live skit of the same name which, although a little cheesy at times, had its chuckle-worthy moments. It was a gentle mockery of the more serious drama MacGyver starring Richard Dean Anderson. The parody skit was later adapted into a movie that debuted in 2010 without much fare at the box office. Regardless of its lack of critical success, the movie is considered a cult classic amongst its diehard fans.

In the photo, Forte and two other members of the main cast – Ryan Phillipe (Lt. Dixon Piper) and Kristen Wiig (Vicki Gloria St. Elmo) stand triumphantly, backlit by a beautiful, blue-sky sunset during the golden hour. Phillippe stares down the camera with his muscly arms crossed, while Forte and Wiig are flexing a classic superhero pose with their hands on their hips. There’s a building that looks like it has the words “Albuquerque Police” on the front. Phillippe is tagged in the post, but Wiig is not. Phillippe commented on the photo with a single word: “Squad”.

There was a reported MacGruber 2 sequel in the works a few years ago, but cult comedy sequels are difficult to get off the ground even under the most ideal of circumstances – and the first movie’s circumstances were anything but ideal. Instead, Forte and fans are settling for a MacGruber series on NBC‘s streaming service, Peacock. Earlier this month, Forte appeared on Late Night with Seth Meyers to announce that filming had begun, and even read a profanity-laced monologue from one of the upcoming episode’s scripts.

If you’re one of the many excited MacGruber fans, you can check out the Instagram post below. There is no official release date yet for the show, but it is expected to debut in late 2021.