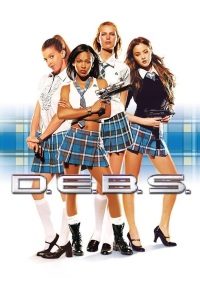 D.E.B.S. needs a sequel. It’s plain and simple. The industry is currently all in on reunion projects that pair beloved original casts with an ensemble of newcomers. There’s also writer-director Angela Robinson who should be getting far more feature film opportunities in general. (Professor Marston & the Wonder Women is another criminally underseen movie of hers.) And to top it all off, D.E.B.S. is just an absolute blast. It features an irresistible cast in an utterly delightful queer comedy that was ahead of its time. How could you not see the potential in another installment?

The 2004 release involves a paramilitary group called D.E.B.S. that finds its new recruits via a test hidden in the SATs that measure one’s aptitude for espionage. Amy (Sara Foster) is a D.E.B.S. top trainee, but deep down, she dreams of going to art school. When Amy and her unit are assigned to track supercriminal Lucy Diamond (Jordana Brewster), the mission winds up sparking a romance between the two.

It wasn’t until I started prepping for a Collider Ladies Night chat with Brewster that I realized, she’s been part of quite a few features that don’t get the respect and credit they deserve. There’s the 1998 horror release The Faculty, which failed to meet Scream standards at the box office. Then there’s The Texas Chainsaw Massacre: The Beginning, which seems to have been slapped with the “just another horror sequel” label and barely managed to crack $50 million at the worldwide box office despite being the second best film in the iconic franchise. And then, of course, there’s D.E.B.S..

While discussing why the movie didn’t hit in 2004, but still has staying power today, Brewster speculated, “Just like The Faculty, the movie held, but everyone’s taste kinda sucked at the time and then everyone caught up, maybe? I don’t know!” She continued:

“I love Angela Robinson so much. I’m still friends with her to this day and she gives me the best advice and she’s so awesome. It’s actually a movie I showed my son recently too because it’s age appropriate. I’m not sure why it didn’t hit at Sundance. But it did become sort of a cult classic which I love, and I love when I get recognized for that movie and people are like, ‘Lucy!’”

Brewster further highlighted the indelible impression Robinson’s had on her over the years:

“She just signed a new deal with someone and I know she’s gonna come out with something brilliant and hopefully she does get the recognition because she’s just absolutely awesome. She got me into Joan Scheckel’s writing class, which is this really intensive three-day thing and she took like six hours out of her day, and it was on the Paramount lot, to take me through how to write, which was so cool of her. I adore her. And I really want to work with her again.”

A Robinson-Brewster reunion sounds great no matter the project, but one can’t help but think they should probably reunite for a D.E.B.S. sequel. Turns out, Brewster even pitched one to Robison:

“I pitched a D.E.B.S. 2 to her and she was like, ‘Are you a teacher?’ I was like, ‘What? I’ve aged?’ I’m not Lucy anymore? What are you talking about?’ [Laughs] So that was super awkward to realize that. Like I’d be another generation, it was very odd to me.”

Way back in 2009, Robinson did mention an idea she had for a potential D.E.B.S. prequel focusing on Lucy Diamond’s origin story. While I’m sure Robinson will make magic with any story set within the D.E.B.S. world, it’s hard not to root for a concept that sees Brewster returning to the role. Perhaps a movie that involves Lucy returning to the academy to help with a new mission or may even using her own experience and expertise to train some new recruits.

Should an idea and a green light ever come together, it wouldn’t be difficult for Brewster to pass the news to D.E.B.S. co-star Jill Ritchie:

“I see Jill Ritchie all the time. Our kids are in the same neighborhood at school so now I see her at pick-up and drop-off and I’m like, ‘This is so weird.’ We’re like, ‘This is our soccer mom life.’ Bizarre.”