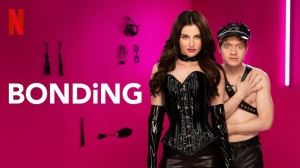 Netflix has brought an end to the laughs for four of its comedies, reports TVLine. These including freshman sitcoms Country Comfort and The Crew. The streaming platform has also brought an end to Mr. Iglesias and Bonding after their second seasons.

Country Comfort starred Katharine McPhee as a down-on-her-luck country singer who becomes a nanny for the musical brood of a single dad, played by Eddie Cibrian. While audiences seemed impressed with the series, it was met by unimpressed critics after its March premiere. The Crew premiered in February, with Kevin James starring as Kevin, the crew chief for a NASCAR team. But even James’ sitcom seniority failed to prevent the show from making a hard right turn on the track. The Crew was an even bigger flop with the critics, logging a 38% Rotten Tomatoes rating.

Despite the renaissance of multi-cam sitcoms in past years, Netflix has struggled to maintain its comedies beyond their second year. Country Comfort and The Crew join the growing list of first season cancellations like Merry Happy Whatever, All About the Washingtons, No Good Nick, and Disjointed. While Netflix has flagship sitcoms like Fuller House and The Ranch, it has failed to retain the majority of its recent premieres.

Multi-cam sitcoms are not the only thing to come and go quickly at Netflix this year, the streaming platform unexpectedly cancelled its space-faring drama Away and superhero series Jupiter’s Legacy.