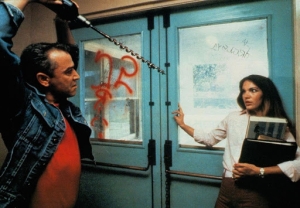 SyFy and Shout! Studios are gearing up to release a new re-imagining of Amy Holden-Jones’ 1982 slasher The Slumber Party Massacre this year, and our first look at the movie has arrived. Most of the film’s plot is currently being kept under wraps, but its first look has been released before its debut on the Cannes Film Market. Brad Miska of Bloody Disgusting premiered the photo (which you can see below), showing our titular slumber party participants congregating at a window.

Continuing with the series’ tradition of being written and directed by women, the new film was directed by Danishka Esterhazy with a script by Suzanne Keilly. Esterhazy has a long list of horror and thriller credits, but many may recognize her name from the insanely fun Banana Splits Movie. Keilly has also written episodes for similarly bizarre shows such as Ash vs. Evil Dead and Warrior Nun. The involvement of women who are known for more strange and outlandish projects such as these shouldn’t be a surprise. After all, the original film’s screenplay by Rita Mae Brown was envisioned as a parody of slashers rather than a straightforward one. It would not be a surprise to see this new remake staying true to Brown’s original vision.

Although premiering in the United States through SyFy, Slumber Party Massacre will be seeking international distribution at the Cannes Film Market. Raven Banner Entertainment is currently handling global sales with Shout! Studios during the Cannes Film Festival this year. The image was released to promote the film’s presence at the Market, which will run from July 6th to the 15th.

“A new contemporary twist-filled reimagining of the 1982 slasher cult classic just in time for Halloween. A slumber party turns into a bloodbath, as a psychotic serial killer wielding a power drill disrupts the fun.”