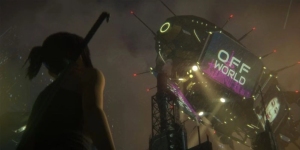 There’s a new anime series inspired by the Blade Runner movie franchise coming, and today we got to learn more about its cast and characters, as well as get an official first look at the series in the image above. Presented by Adult Swim and Crunchyroll, Blade Runner: Black Lotus will feature thirteen episodes directed by Shinji Aramaki and Kenji Kamiyama.

Set in a cyberpunk Los Angeles, Black Lotus will offer fans of the Blade Runner movies an original story revolving around a replicant created in secret. While both Blade Runner movies focused on police agents, Black Lotus seems ready to expand the franchise into new directions, as the list of characters includes black market dealers, politicians, and scientists. Adult Swim will air the English language version as part of the Toonami block, while Crunchyroll will stream the series in Japanese with subtitles.

There’s still no specific release date for Blade Runner: Black Lotus, though it’s been confirmed the series will debut later this year. The show will debut at Comic-Con@Home 2021 panel hosted online on Friday, July 23, 8 p.m. ET.