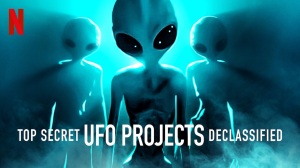 The trailer shows some shocking imagery featuring possible real-life aliens and “proof” that the government covers up evidence of extraterrestrial life. In the opening of the trailer, viewers are treated to black-and-white footage that depicts big-headed, large-eyed aliens roaming through the desert and UFOs flying high in the sky. The trailer then proceeds to explore why this footage was never released before, and how the truth will be coming out slowly but surely, possibly against the government’s wishes. The footage is intense and paints the upcoming docuseries as one of the most in-depth explorations of alien life ever made.

Netflix has other documentaries available to stream that ponder the existence of aliens, but this docuseries is one of the first original projects from the streamer to explore extraterrestrial life in such extensive detail. Netflix released a show back in 2020 titled Alien Worlds, which imagined what alien life would be like if they did exist, but it didn’t argue the fact that aliens are already confirmed as legitimate by major sources who have just never released the information to the public before. The creators of Top Secret UFO Projects: Declassified seem to firmly believe that aliens are among us, and want the world to know the truth.

Based on the very revealing trailer, it seems as though Top Secret UFO Projects: Declassified may change society’s viewpoints on the existence of alien life for good. Check out the official trailer and synopsis below:

Top Secret UFO Projects: Declassified is an “original factual television series featuring the most recent information and proof exposing the most top-secret government projects that handled contacts with and cover-ups of, extraterrestrial presence on Earth. Though claims of extraterrestrial encounters have long been dismissed, many believe the existence of UFOs is not just likely, but a certainty.”