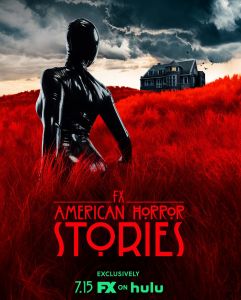 FX on Hulu has released the official trailer for American Horror Stories, giving us an actual look at what this new anthology series from Ryan Murphy and Brad Falchuk will be. The anthology is a spinoff of sorts from the flagship FX series American Horror Story (a new installment of which is also on the horizon), and cuts down the amount of time that Murphy has to muck up a story even further. Indeed, each episode of American Horror Stories tells is own, self-contained horror story, so you’ll get a beginning, middle, and end with each installment.

The trailer gives us a look at some of the cast, which includes familiar AHS faces that appear to be playing new characters like Billie Lourd, Matt Bomer, and John Carroll Lynch. The trailer also opens with a shot of Murder House, and it’s unclear if just one of the episodes focuses on a return to the haunted house where the AHS franchise started, or if that’s the whole conceit of American Horror Stories — a series of different horror tales all set within the walls of the deeply cursed house.

Whatever the case, this should make for a fun little binge-watch, and like Black Mirror I’m sure everyone will have their own favorite episode. In addition to Murphy and Falchuk, the series is also executive produced by Alexis Martin Woodall, John J. Gray and Manny Coto. Check out the full American Horror Stories trailer below. All nine episodes of the first season will be available to stream on FX on Hulu on July 15th.