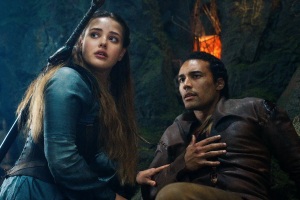 Lavish fantasy series Cursed has been canceled by Netflix after just one season, per Deadline, with the principal cast having been released from their contracts. Based on the illustrated novel by Frank Miller and Tom Wheeler, the show was a retelling of Arthurian lore as seen through the eyes of Katherine Langford‘s Nimue, who would go on to become the Lady of the Lake in the ancient legends.

The young heroine discovers she has a mysterious gift that will have a huge bearing on both her kingdom and destiny. Partnering up with Devon Terrell‘s mercenary and future king Arthur following her mother’s passing, Nimue inspires a rebellion against the Red Paladins and their leader King Uther, as played by Sebastian Armesto. Vikings star and member of Swedish acting royalty Gustaf Skarsgard was also along for the ride as Merlin, stealing almost every scene he was in with an eccentrically charismatic performance.

The first ten episodes of Cursed rolled out onto Netflix last summer, and while it spent a decent amount of time on the platform’s most-watched rankings, it didn’t quite puncture the zeitgeist or seize the cultural conversation the way everyone involved would have hoped, even if there was plenty to admire in terms of the production design and visual effects, with Langford more than capably anchoring the narrative as the fearless Nimue.

Dealing with themes like the destruction of the natural world, religious fanaticism, and cultural oppression, Cursed even managed to sneak in some timely sociopolitical subtext in among the swordfights and battles against mystical creatures, but it’s now reached the end of the line. Netflix has canceled a slew of original episodic titles recently, including fellow big-budget fantasy Jupiter’s Legacy, but there were hopes that Cursed may live to fight another day, which has now been extinguished.