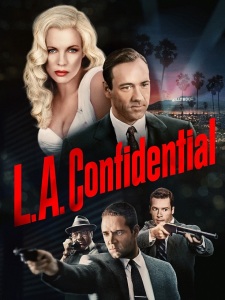 There’s no doubt that there would have been many more great performances from actor Chadwick Boseman, who tragically passed away in August 2020. According to The Ringer, Boseman was set to take on a new role in a sequel to the beloved neo-noir L.A. Confidential, re-teaming with 42 director Brian Helgeland, who wrote the original. The pitch was denied by Warner Bros., a move that’s hard to envision boiling down to having an Academy Award-nominated actor such as Boseman on board.

Boseman‘s talent and star power aside, it’s hard to imagine why the studio passed on this project. Helgeland had also recruited the original film’s stars, Russell Crowe and Guy Pearce, to return. Boseman would have played a young police officer opposite the two leads. A new story had also been crafted with James Ellroy, novelist of L.A. Confidential. The mid-1970s would have served as the sequel’s time period. According to Helgeland:

“We worked the whole thing out. It was great. And Warners passed.”

Boseman would certainly have not been a stranger to this kind of role, starring as Detective Andre Davis in 22 Bridges in 2019. Of course, he is known to most audiences as King T’Challa/Black Panther in the Marvel Cinematic Universe, starring in four films of the long-running franchise. His work as James Brown in Get On Up and Thurgood Marshall in Marshall showed his true skill and knack for taking on historical figures. He was most recently seen in two Netflix films, Spike Lee‘s Da 5 Bloods and George C. Wolfe‘s Ma Rainey’s Black Bottom, having been nominated for an Academy Award in the latter. His final role will be coming soon to Disney+, as he voices T’Challa in an episode of Marvel’s What If… series.

L.A. Confidential also made a presence at the 70th Academy Awards, with seven nominations and two wins in 1997. It won Best Supporting Actress for Kim Basinger, and Best Adapted Screenplay for Helgeland and Curtis Hanson. L.A. Confidential ultimately lost Best Picture to James Cameron‘s Titanic. TIME Magazine named it the best film of 1997, and the New York Films Critics Circle deemed it the best screenplay written by Hanson and Helgeland.

An L.A. Confidential sequel with Boseman trading quips and tackling a case alongside Pearce and Crowe is tantalizing, to say the least. It may never be known why Warners passed, but given the track records of Boseman and Helgeland, it’s hard to imagine the studio passed because of them. Thankfully, Boseman gave us several entertaining, thoughtful, and heartfelt performances in his meaningful life that will not be forgotten.