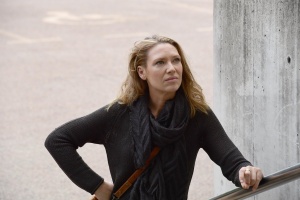 Anna Torv, best known for her roles in the shows Fringe and Mindhunter, has been cast as Tess in HBO‘s The Last of Us series. The drama series’ first season is based on the popular video game of the same name, in which Tess plays a pivotal role in helping our leads, Joel and Ellie. Joel has a close relationship with Tess, and both are in a militarized quarantine zone together early on in the game. Joel and Tess seek out to reclaim stolen guns, but they run into the leader of a resistance group known as the Fireflies, and the duo ends up being tasked to smuggle 14-year-old Ellie out of the zone. Tess is described as a hardened survivor living in a world overrun by zombies infected with cordyceps fungus.

Torv is also joining Pedro Pascal as Joel; Bella Ramsay as Ellie; Gabriel Luna as Joel’s younger brother, Tommy; Merle Dandridge as Fireflies leader Marlene, a role she also voiced in The Last of Us and The Last of Us: Part II games; Nico Parker as Joel’s 14-year-old daughter Sarah; Murray Bartlett as Frank and Con O’Neill as Bill, two survivalists living alone in their own isolated town; and Jeffrey Pierce, the voice of Tommy in the games, as a rebel named Perry.

After Mindhunter, Torv went on to star on the Australian drama series The Newsreader. Mindhunter‘s David Fincher said a third season “probably” isn’t happening after voicing his exhaustion from filming the first two. Netflix, however, is leaving the door open should he want to revisit in the future.

The Last of Us has quickly become one of the more anticipated television projects on the horizon, thanks to the popularity of its award-winning games. Neil Druckmann, the creative director of Naughty Dog, which developed the games, is an executive producer, along with Chernobyl duo Craig Mazin and Carolyn Strauss.

Kantemir Balagov directs the pilot episode, which will start principal photography soon in Alberta, Canada. Other directors include Jasmila Žbanić and Ali Abbasi. The Last of Us is currently filming, although it’s unclear when we can expect to see Joel, Ellie, and Tess come to life on HBO.