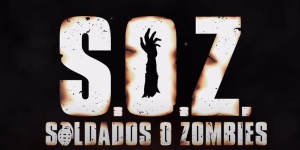 Amazon Studios has released the official trailer for their upcoming science-fiction action series, S.O.Z. Soldiers or Zombies. The new eight-episode thriller stars Sergio Peris-Mencheta (Life Itself), Fátima Molina (Who Killed Sara?), and Horacio García Rojas (Narcos: Mexico), and puts a new twist on the idea of an undead army, set in the arid heat of the Mexican desert.

When a team of soldiers attempts to capture charismatic drug lord, Alonso Marroquín, who has escaped from a Mexican prison to avoid extradition, they are met with the terrible result of a United States genetic experiment gone wrong. After encountering a pig infected with the results of the experiment, the soldiers are transformed into unstoppable, undead machines, and the series becomes a war between one of Mexico’s most unpredictable drug cartels and a horde of zombies.

“They weren’t killed,” says the American scientist responsible for the virus. “They were infected. They’re highly mobile, and they’re out there.” All-out war erupts throughout the trailer, not only between Marroquín and the zombie-soldiers, but also from the American government, in an attempt to capture and eliminate the monsters they’ve created.

S.O.Z. Soldiers or Zombies will premiere exclusively on Amazon Prime Video on August 6. Watch the full trailer below.