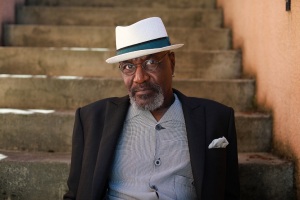 Amazon‘s latest Neil Gaiman adaptation Anansi Boys has just snagged a major talent with the news that Delroy Lindo will play a lead role in the series. The six-episode miniseries is being fast-tracked, having only been made official a week ago, but the casting process is evidently already underway and shooting is scheduled to kick off in Scotland before the end of the year.

Sir Lenny Henry is set to co-write the project with Gaiman, which follows the story of Charlie Nancy, a young man continually embarrassed by his distant father, the enigmatic Mr. Nancy. When his old man dies, Charlie discovers that not only was he was actually the Ghanian trickster god Anansi, but his secret brother Spider then enters his life to introduce a mix of intrigue and danger.

As you may have guessed, Lindo has joined the ensemble as Mr. Nancy, which seems like it’ll be a perfect showcase for his talent, range and versatility. The actor has been working solidly for over 40 years, lending support in a string of box office hits and classics like Malcolm X, Get Shorty, Ransom, Broken Arrow, The Cider House Rules, Gone in 60 Seconds, and countless more, but delivered arguably the best work of his career with a stunning turn in Spike Lee‘s Da 5 Bloods, yet he was somehow left out of the Oscar race.

Gaiman was effusive in his praise for Anansi Boys‘ first major recruit, praising Lindo‘s ability to the hilt:

“Delroy Lindo is a giant of the stage and the screen, and we are so lucky to have him. I cannot wait to see his gravitas and charm being deployed for the benefit of Anansi Boys, as he plays an unreliable father with hidden depths.”

Netflix‘s Lucifer might be drawing to a close and Starz has canceled American Gods, but the Gaiman renaissance continues with The Sandman, Good Omens 2, and now Anansi Boys coming to streaming. As well as co-writing, Gaiman and Henry also serve as executive producers alongside Douglas Mackinnon, Hanelle M. Culpepper, Hilary Bevan Jones, and Richard Fee.

Small screen veteran Culpepper will direct the pilot, with Jermain Julien and Azhur Saleem also set to helm episodes. There’s no release date as of yet, but Anansi Boys is likely to premiere on Amazon Prime Video in 2022.