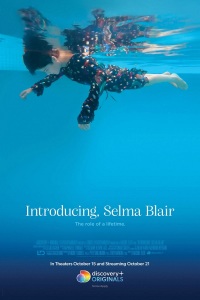 Discovery+ has released the trailer and two premiere dates for the intensely personal documentary Introducing, Selma Blair. The streaming platform acquired rights back in March before the film’s premiere at this year’s SXSW, where it won a Special Jury Award for Exceptional Intimacy in Storytelling. It follows actor Selma Blair during the year after she was diagnosed with Multiple Sclerosis. The documentary will be released in theaters on October 15 and be available for streaming six days later, on October 21.

The images registered by director Rachel Fleit and Blair herself reveal that both women weren’t afraid to show the lowest, most brutal, and personal moments throughout Blair‘s MS episodes and treatment, as well as the actor’s ability to maintain her sense of humor even at her lowest emotional and physical points.

Introducing, Selma Blair is the first documentary feature film by Fleit. Blair became known worldwide after she played Cecile Caldwell in 1999’s Cruel Intentions. After that, she starred in high-profile films such as Guillermo Del Toro’s Hellboy and Legally Blonde. On TV, she was in comedy series like Kath & Kim and Anger Management. Currently, she’s starring on Netflix’s Another Life, which was renewed for Season 2 and is slated to premiere this fall.

You can watch the full trailer for Introducing, Selma Blair below. (Content warning for Multiple Sclerosis episodes, chemotherapy sessions.) The film will premiere in theaters on October 15 and be available to stream on Discovery+ on October 21.

Here’s the official synopsis for the film:

Director Rachel Fleit’s deeply intimate and powerful feature of one woman’s journey of personal acceptance and resilience, Introducing, Selma Blair, follows the singular actress as she reckons with the next chapter of her life after being diagnosed with Multiple Sclerosis. The film explores complex issues ranging from dissecting deep-rooted myths about beauty, and the collective fear around disability and mortality. Complete with her trademark wit and humor, the film follows Blair as she reconciles a journey of monumental transition.