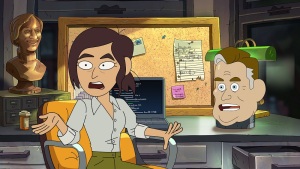 Netflix has a new adult animated comedy series in store for those who would enjoy a lighter approach to the extremely debated topic of conspiracy theories. Inside Job is a comedy show created by Shion Takeuchi, best known for her work as a writer in comedy animated series such as Gravity Falls and Regular Show.

In the world of Inside Job, conspiracies are not merely theories, they are very much part of the reality lived by our colorful cast of strange characters. Striving to keep these conspiracies a secret from the public is not at all an easy job but that’s precisely what our protagonists do as a living at Cognito Inc. In a workplace overrun with reptilian shapeshifters and psychic mushrooms, anti-social geek genius Reagan Ridley is seen by her coworkers as an odd individual for her ingrained belief that the world could be a better place. Reagan believes that her work could make a difference and bring something positive to the table.

However, her job would be way easier if her colleagues remotely shared her ambitions, and especially if she could somehow manage her deranged father and his manifesto-writing compulsions. In the midst of all this chaos, will Reagan be able to achieve the promotion she has dreamt of?

Among the members of Inside Job’s voice cast, we can find Lizzy Caplan (Cloverfield) in the role of Reagan, as well as the likes of Christian Slater, Clark Duke, Tisha Campbell, Will Blagrove, Andrew Daly, Bobby Lee, John DiMaggio and Brett Gelman. This series is also executive produced by Alex Hirsch who created Gravity Falls.

It has recently been announced that this 20-episode animated comedy show that pokes fun at some of the most well-known as well as obscure conspiracy theories, will be released exclusively on Netflix on October 22 of this year. Check out the images below.

The show is about a dysfunctional team whose daily grind is committing the world's conspiracies.