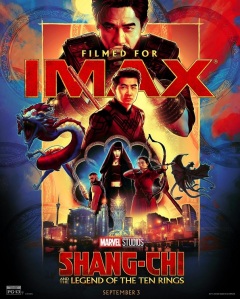 Disney released a new Shang-Chi and the Legend of the Ten Rings featurette that place’s the hero as the next defender of the MCU, encharged of protecting the world like the Avengers who came before.

The new featurette opens up to a montage of Iron Man’s armor, Captain America’s shield, and Thor’s hammer, as Michelle Yeoh’s voice says that the new hero is the “product of all who came before you”. We then get to see scenes revealed by the previous trailers, as star Simu Liu says, “I’ve lived in the shadows. But now it’s time to show them who I really am”.

While Black Widow has officially brought Phase Four of the MCU to theaters, Shang-Chi will be the first movie to present a new hero, who’s expected to be central to the cinematic universe’s future. So, it’s no wonder that Disney is selling Liu’s Shang-Chi as the worthy successor of the heroes who came before.

Shang-Chi will follow the titular character as the hero deals with his criminal heritage, as the heir of the criminal organization Ten Rings. Shang-Chi’s father, the Mandarin (Tony Leung), wants his son to take over the family business, something the MCU’s next hero refuses to do.

The resurgence of the Ten Rings in the MCU will allow Ben Kingsley to reprise his role as the fake-Mandarin he played in Iron Man 3. Kingsley is not the only MCU returning character on Shang-Chi as Benedict Wong will also be returning as Wong, Doctor Strange’s right arm. The crossovers don’t stop there, though, as the master of magic will be fighting The Incredible Hulk’s Abomination. Tim Roth is expected to come back as the voice of Abomination in the movie before starring in the upcoming She-Hulk series.

Shang-Chi and the Legend of the Ten Rings will arrive in theaters on September 3. Check the new featurette below:

Here’s the official synopsis for the film:

"It's time to show them who I really am." Experience Marvel Studios' #ShangChi and the Legend of the Ten Rings in theaters September 3. Get tickets now: https://t.co/PeUKzfdj1a pic.twitter.com/A8Sj7fe7pN

Marvel Studios’ Shang-Chi and The Legend of The Ten Rings stars Simu Liu as Shang-Chi, who must confront the past he thought he left behind when he is drawn into the web of the mysterious Ten Rings organization. The film also stars Tony Leung as Wenwu, Awkwafina as Shang-Chi’s friend Katy and Michelle Yeoh as Jiang Nan, as well as Fala Chen, Meng’er Zhang, Florian Munteanu, and Ronny Chieng.