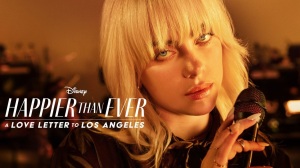 Disney+ has released the first trailer for its upcoming Billie Eilish concert film, Happier than Ever: A Love Letter to Los Angeles. Described as a “cinematic concert experience,” the film combines performances of Eilish‘s new album, “Happier than Ever,” with animated elements featuring Eilish against the backdrop of Los Angeles and its most iconic landmarks.

While the teaser trailer released last month offered the briefest of glimpses of those animated segments, the new trailer puts the animation front and center, offering a clearer sense of how those segments will interact with the live-action performances. “It’s a concert film, but it’s also a story at the same time,” Eilish explains. “This kind of beautiful version of old Hollywood.”

The film is jointly directed by Robert Rodriguez and animator Patrick Osborne. Rodriguez has always been an eclectic director, with projects ranging from the over-the-top action of Sin City to the family-friendly Spy Kids franchise. He has previously directed music videos for Demi Lovato, Ariana Grande, and Lady Gaga, so this project feels very much in his wheelhouse. Osborne is a celebrated director of animated films, having taken home an Oscar for his 2014 short, Feast, and an Emmy for his 2016 short, Pearl.

“We are all huge admirers of Billie and Finneas here in our household,” said Rodriguez. “They are such impressive, world class talents that it’s a real honor to work with them on this film. The way the narrative story and animated pieces weave through her incredible concert performance, makes this a spectacular event that is truly unique.”

Happier than Ever: A Love Letter to Los Angeles premieres on Disney+ on September 3. Check out the trailer below.