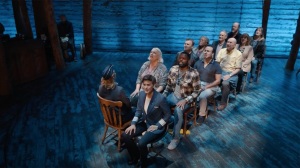 Apple has revealed the trailer for Come From Away, the Broadway musical that became a surprise hit in 2017. Plans for a movie were scrapped in 2019 after the pandemic, but similar to what Disney+ did with Hamilton, Apple TV+ will release a live performance of the show that audiences can watch from the comfort of their homes.

Come From Away was announced at the beginning of 2021, with Tony Award winner Christopher Ashley attached to direct. The show tells the story of several thousand people who were forced to stay in Newfoundland, Canada after the 9/11 terrorist attacks when air travel was closed. Now, the trailer for the musical reminds us that a little bit of kindness goes a long way, especially in desperate times.

The book, music, and lyrics of Come From Away were written by Irene Sankoff and David Hein. The musical was nominated in seven categories at the 2017 Tony Awards, including Best Musical and Best Book of a Musical. The live performance of Come From Away was filmed at the Gerald Schoenfeld Theatre in New York City, where the Broadway production is staged, for an audience that included 9/11 survivors and frontline workers.

Come From Away premieres on Apple TV+ on September 10, the eve of 9/11’s 20th anniversary. Check out the trailer for Come From Away below:

Here is the official synopsis for Come From Away:

‘Come From Away’ is the filmed version of the award-winning Broadway musical which tells the story of 7,000 people stranded in the small town of Gander, Newfoundland after all flights into the US are grounded on September 11, 2001. As the people of Newfoundland graciously welcome the “come from aways” into their community in the aftermath, the passengers and locals alike process what’s happened while finding love, laughter and new hope in the unlikely and lasting bonds that they forge.