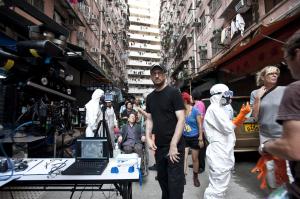 HBO Max has ordered the limited series Full Circle from director Steven Soderbergh and writer Ed Solomon. Hot on the heels of their smash feature No Sudden Move for the streamer, the duo returns to the crime genre for the six-part series.

The series follows the investigation of a botched kidnapping, which uncovers long-held secrets connecting multiple characters and cultures in present-day New York City. “Even by Ed’s standards this is a complex narrative that manages to be both kaleidoscopic and intimate,” said Soderbergh. “Our task now is to assemble a great cast and make sure we execute at the level the scripts deserve.”

Soderbergh and Solomon will also executive produce the series, alongside Casey Silver. This represents the trio’s latest collaboration at HBO, which includes No Sudden Move and 2018’s limited series, Mosaic.

“We are thrilled to be working with Steven, Ed and Casey again after the masterful crime drama, No Sudden Move,” enthused Joey Chavez, HBO Max‘s executive vice president of original drama. “This new limited series is full of twists and turns in the way only this team can do.”

All of that enthusiasm certainly seems warranted. With Soderbergh at the helm, the series is sure to be executed with style and grace, and if his past collaborations with Solomon are any indication, it’s sure to break twisty new ground. No news on casting yet (though I can think of one actor who is sure to at least give the script a read), but if they can muster even a fraction of the star power of No Sudden Move, this series is set to be an all-out banger.