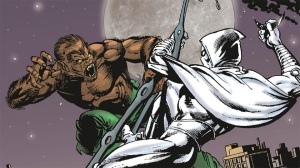 The Marvel Cinematic Universe is continuing to expand in some major ways in the next few years, particularly through programming on Disney+. The hit superhero franchise has already aired three live-action and one animated series on the streaming service, with many more on the way. According to a new report from The Wrap, we now know the latest project that could be headed to the streamer, as Marvel Studios is reportedly developing a Halloween special for Disney+, which could be based on Werewolf by Night. The project is reportedly “actively searching” for a Latino male actor in his 30s to star in the project, which would begin production in early 2022.

Werewolf by Night has had two incarnations in the pages of Marvel Comics, beginning with Jack Russell, a descendant of Lycanthropes who has the ability to turn into a werewolf without a full moon. A second incarnation of the character, Jake Gomez, is a Native American man whose family has been cursed by lycanthropy.

Rumors have been swirling for years around Werewolf by Night’s place in the MCU, with reports dating back to 2019 indiciating that he could appear in some sort of upcoming project. This past July, Kevin Smith revealed that Marvel Studios shut down plans for him to put Werewolf by Night in his now-defunct Howard the Duck animated series, because the character would already be appearing elsewhere.

“In my head, as I started building my season, I was like, ‘Alright. Episode 5. Werewolf by Night,'” Smith explained on his Fatman Beyond podcast earlier this year. “The idea of our story was that Howard was trapped here and he was trying to get pages of the Darkhold, which would allow him to go back. There’s Howard as I’m laying it out and then I go into Jeph and told him what I wanted to do, and that’s when they said ‘You can’t use Werewolf by Night,’ and I asked why. They said the movie division was using him.”

If this Werewolf by Night-inspired project comes to fruition, it would be the second MCU special planned for Disney+, with the streaming service also currently planning a Guardians of the Galaxy Holiday Special written and directed by James Gunn.