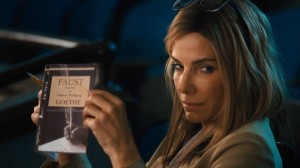 Netflix has released a first look at their newest drama-thriller, The Unforgivable, which looks like it’s taking star Sandra Bullock to all new, never-before-seen levels.

Based on the British miniseries Unforgiven, the film, also starring Vincent D’Onofrio and Jon Bernthal, follows Bullock as a woman recently released from prison, coping with the fact that the world refuses to forgive her for the crimes she’s committed.

In a sharp turn from her role as a glamorous ex-con in Ocean’s 8, Bullock’s Ruth Slater didn’t go to prison for theft, but rather for a violent (but undisclosed) crime, something no one is willing to look past. With nowhere else to go, Ruth is forced to find redemption in her estranged younger sister, whom she was forced to leave behind when things went south.

Get ready for a powerhouse Sandra Bullock performance. In Nora Fingscheidt's THE UNFORGIVABLE, Bullock plays a woman re-entering a society that refuses to forgive her after serving a prison sentence for a violent crime. ​​In select theaters November 24 and on Netflix December 10. pic.twitter.com/dtOedauN9E

The first look still sees Bullock looking as one would expect an ex-con to look — ratty hair, sallow cheeks, no makeup. She stares at herself in the mirror, a mirror in a rather unsavory-looking location, contemplating what one can only assume is her future and how she’s going to navigate it with the weight of her past on her back.

“There are several people whose lives [Ruth] affected by this crime she committed,” Bullock told Entertainment Weekly, “And there’s a lot of hatred and anger and bitterness and sorrow associated with her release. She wants to find this one person, the only family she had when she went in, and you keep asking yourself, ‘Why can’t you let it go? This family member was traumatized by your actions — let it go! Stop harming these people all over again.'”

Also starring Viola Davis, Richard Thomas, Linda Emond, Aisling Franciosi, and Rob Morgan, The Unforgivable is directed by Nora Fingscheidt, with a script from Peter Craig, Hillary Seitz, and Courtenay Miles. Bullock produces the film alongside Graham King and Veronica Ferres, which will arrive in select theaters on November 24, before premiering worldwide on Netflix on December 10.