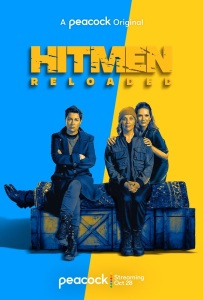 Mel and Sue are back at it and this time with more blood, drama, and comedy in the first trailer for Hitmen Season 2, titled Hitmen: Reloaded, which will become available on Peacock starting October 28. The duo that first entered America’s hearts in the best years (2010-2016) of The Great British Bakeoff (seriously, the show will never be the same without them, I’m still not over their departure 5 years later) one soggy bottom at a time, wowed audiences and critics alike with their debut in the silly yet serious first season of Hitmen which aired in March 2020.

The show tells the story of two friends, Jamie (Mel Giedroyc) and Fran (Sue Perkins), that are alone in the world except for the seemingly unbreakable bonds of their friendship. Just two gals living what appear to be normal lives, except they make their living killing people. Under the direction of their boss, the ominous Mr. K, the team travels around in an unassuming (on the outside, at least) van and kidnaps their targets. Each episode follows the pair as they get a new assignment and the comedic shenanigans that come along the way.

The trailer for Season 2 picks up with Jamie and Fran in an empty pool about to commit their “last hit.” Distracted by the sentiment in this moment, the duo almost lets their target get off easy as they begin to walk away. Just in time, Fran realizes the almost mistake and pulls the trigger on the hit. The rest of the trailer is non-stop action as we see the women doing their jobs in various places, including what appears to be some sort of high school reunion or maybe an 80s themed dance party? Can’t wait to find that one out. All of this action — along with high-speed car chases, dueling with targets and other hitmen, the pair hiding or being trapped in a coffin, and another look at that mysterious 80s-themed event — shows us that this season is bound to be another rib busting laugh-fest with comedically dark undertones.

Starring along Perkins and Giedroyc, to really pull the ensemble cast together, are Jason Watkins (McDonald & Dodds, Des), Sian Clifford (Fleabag, Two Weeks to Live), and Asim Chaudhry (People Just Do Nothing). Judging by the trailer, which you can watch below, this season looks nothing short of comedic genius as we watch the team execute not only their hits, but also their perfectly timed jokes.

Season 2 of Hitmen begins streaming Thursday, October 28, with all six episodes available at once on Peacock. Check out the trailer and poster below: