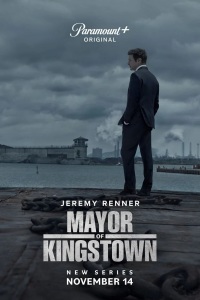 Paramount+ has released the official trailer for their upcoming show Mayor of Kingstown. The new series is created by Taylor Sheridan (Yellowstone, Hell or High Water) and Hugh Dillon (Durham County, Flashpoint).

The trailer focuses on Mike McLusky, who is played by Jeremy Renner (The Hurt Locker, Hawkeye), as he talks to various members of his family, as we hear that they’re ‘fix-it men,’ and that he has always hated Kingstown. McLusky is accused of having always wanted to leave the town, but that he doesn’t plan on leaving. We also get to see some of the conflicts in the show, including many crimes throughout the city, and problems with the local prison. The trailer ends with McLusky saying that the town is not torn to pieces yet, “Not even close,” but that “it’s coming.”

Mayor of Kingstown follows the McLusky family, who are power brokers in the town of Kingstown, Michigan. Along with Renner, the show features Dianne Wiest (Hannah and Her Sisters, Edward Scissorhands), Kyle Chandler (Friday Night Lights, The Wolf of Wall Street), Emma Laird (In Conversation With a Goddess), Taylor Handy (Jack Frost, Bird Box), Dillon, and Tobi Bamtefa (The Witcher, How to Build a Girl). The show will air on November 14, and will be released on Paramount+. Check out can the official trailer for Mayor of Kingstown below.

Here’s the official synopsis for Mayor of Kingstown:

MAYOR OF KINGSTOWN follows the McLusky family – power brokers in Kingstown, Mich., where the business of incarceration is the only thriving industry. Tackling themes of systemic racism, corruption and inequality, the series provides a stark look at their attempt to bring order and justice to a town that has neither.