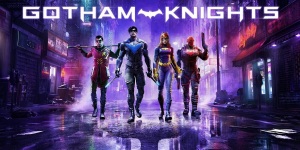 At DC FanDome, we got a new look at the upcoming Gotham Knights video game, which hails from developers WB Games Montréal, who previously handled Batman: Arkham Origins. In the open-world game, you’ll take on the roles of Nightwing, Batgirl, Robin, and Red Hood as you fight the Court of Owls and investigate a serious crime that has affected all of Gotham.

The Gotham Knights game takes us into a Gotham where Bruce Wayne has been revealed to be dead, which leaves the safety of the city up to the members of the Bat-Family. A new threat looms in the form of the Penguin, as well as the mysterious Court of Owls, a hidden force that no one is willing to take on themselves.

Gotham Knights is an open-world, action RPG set in a dynamic and interactive version of the Bat-Family’s stomping ground of Gotham City. You can either play solo missions or co-op, patrolling Gotham’s five distinct boroughs and dropping in on criminal activity wherever you find it.

Check out the new story trailer below. Gotham Knights is set to arrive on PlayStation 4, PlayStation 5, Xbox One, and Xbox Series X/S in 2022:

Batman is dead. A new expansive, criminal underworld has swept the streets of Gotham City. It is now up to the Batman Family; Batgirl, Nightwing, Red Hood, and Robin; to protect Gotham, bring hope to its citizens, discipline to its cops, and fear to its criminals. From solving mysteries that connect the darkest chapters in the city’s history to defeating notorious villains in epic confrontations, you must evolve into the new Dark Knight and save the streets from descent into chaos.