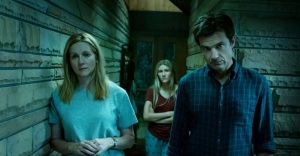 Ozark Season 4 is on its way. Netflix released a short trailer for what will be the first part of the last season of the hit series. Slated to come out on January 21, 2022, it looks like fans can finally get excited about at least the first seven episodes of the new season. This should go without saying, but there are spoilers ahead.

The series is centered around the Byrde family, who, in the first season, leave Chicago at the behest of their father, Marty Byrde (Jason Bateman). Marty is involved in a money laundering scheme with a drug cartel that goes horribly wrong. To appease the bosses of the cartel, Marty agrees to uproot his family from their city life and move to the Lake of the Ozarks area in Missouri to set up an even larger money laundering operation. The family then begins to fall into a life of crime and lies where no one is safe and no one can be trusted.

Season 3 left fans stunned and unsure of what is next to come next after crime boss Navarro (Felix Solis) shot and killed Helen Pierce (McTeer). The newly released trailer sheds a little bit of light on how the Byrde family is going to move forward after that surprising conclusion. Among other mysterious quotes from the trailer, we hear the words “Broken promises got consequences” and judging by that alone, we can gather that we are in for another twisty, turny season of one of Netflix’s most beloved shows beginning on January 21. Check out the full trailer below.