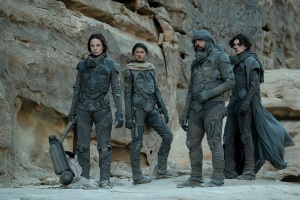 Dune has easily become Denis Villeneuve’s biggest domestic opening at the box office, and the best start for Warner Bros. and an HBO Max day-and-date title with $40.1M. Business was actually better than many had anticipated for Saturday, -22% from Friday with $13.7M, sending the Frank Herbert feature adaptation ahead of tracking’s opening forecast of $30M-$35M.

This is also the 8th film from Warners to open at No. 1 this year. The pic overindexed in Villeneuve’s Canadian homeland, driving 11% of the gross where Dune resides on a theatrical window, sans HBO Max, since the OTT service isn’t available there yet.

Worldwide weekend on Dune was $87.5M, ahead of the $70M we were spotting sending the pic’s total global running cume to $220.7M.

There are some cynical executives out there who want to gripe and say that this isn’t a great start stateside for a male-geared movie which is carrying $300M in estimated production and distribution costs.

Again, very few of these movies, which have been sitting on the shelf collecting interest costs during the pandemic, are apt to make their money back in the short term. In addition, there’s the whole hybrid release of Dune, which is certainly shaving off dollars. Legendary funded 75% of Dune, Warners 25%, but I understand the former and its cast and filmmaker were compensated by the studio in regards to profiting off of downstreams as though Dune performed like a mega-blockbuster. Such are the terms for these event movies which are sent to HBO Max.

And yes, the result here for Dune, and the vibrant pre-sales we heard about going into the weekend (the best to date), beg the question as to how much money is being left on the table with the HBO Max release, especially at a time when younger audiences are driving the box office recovery.

If Dune clocks a similar US household viewership draw in Samba TV terrestrial homes as the first weekend of New Line/HBO Max Mortal Kombat (3.8M), and we use the average price for Dune tickets from box office firm Market EntTelligence ($14.41), back-of-the-napkin calculations could indicate that some $55M was left on the table at the domestic B.O. with Dune (meaning a possible domestic opening of $95M).

However, the only questions with that calculation is a) how many people who watched Dune at home were going to skip seeing it in theater, and b) that calculation is based on one person per household watching this all-star ensemble of Zendaya, Oscar Isaac, Jason Momoa, Rebecca Ferguson, Timothee Chalamet.

Understand that these day-and-date decisions to go hybrid are made well in advance, as contracts drag on in compensating talent. Even as the domestic box office made a turnaround with Shang-Chi over Labor Day weekend, Warners couldn’t just put Dune back on a pure theatrical window path. The studio sold subscriptions off of Dune being part of the HBO Max 2021 lineup, and to put the title squarely back in theaters would have resulted in consumer backlash and a potential legal conundrum.

Don’t worry, WarnerMedia isn’t going to get drunk on this distribution model: They’ve already committed to a 45-day theatrical window next year. Understand this is a great result for the current marketplace; no one in exhibition is complaining, as Dune caps off a robust month, and it shows that when people want to get out of the house and make time for the cinema, they do — even if it’s on HBO Max.

Sure, yes, the drops on Warner/HBO Max films are steep in weekend 2. If Warner Bros. can pull a rabbit out their hat and get Dune to $100M in the US and Canada, like they did with Godzilla vs. Kong, I’m sure they’ll think it’s a job well done in addition to what they pull in overseas.

Dune‘s success will be spelled over the long road: Dune is a film, like George Miller’s Mad Max: Fury Road (which was also a very expensive movie at $185M net before P&A, and topped out at $375.7M WW) which is poised to be in the running this awards season. Fury Road notched six Oscars, including nominations for Best Director and Best Picture, and a spin-off is set to shoot and become the biggest production Australia has ever seen next year, with Furiosa. Not to mention, WarnerMedia executives have talked up a Dune 2.

Warner Bros. knew they had a great epic on their hands with Dune, and began screening this film immediately at the end of August to awards voting members and press. They world- premiered the movie at Venice, and then at TIFF. Heck, they were even dropping trailers for the movie back during the earlier part of the pandemic, just after Tenet debuted in theaters in August 2020. According to iSpot, Warners spent $13.3M in US TV spots from mid-Sept. 2020 to late July 2021, then another break, and re-started the campaign from August until now.

RelishMix says that Dune‘s social media across YouTube views, Facebook, Twitter and Instagram stood at 474.1M before opening, “2X the genre norm, fueled by re-starts of campaign — plus the effect of the well-activated cast at 41% of the reach.”

On Facebook, Warners took an organic approach to video engagement by posting 41 trailers and clips for 2.5M views, which began on Sept. 8, 2020, pausing and then rebooting 13 weeks ago. Over on YouTube, the eight videos have clocked a healthy 206.7M views and a viral rate twice the norm, too, at 40:1.

Added to the triangulation of WB Pictures at 57.8M and HBO Max at 4.1M is the robust Legendary studios’ social media universe of 2.4M, which saw strong activity with trailers in the wake of Godzilla vs. Kong and strong international engagement with an added set of five YouTube videos. Not only were the cast posting Dune materials, but below the line folks as well, i.e. composer Hans Zimmer with a #DuneMovieDuet challenge on TikTok. In the mix across YouTube are 21 Zimmer soundtrack components which were dropped 4 weeks ago on the Warner Bros’ WaterTower channel. DP Greig Fraser shot loads of stills seen on his Instagram to 68K fans mixed in with The Batman.

“Casting impact scores solid points at 199.2M, with 41% of the social media awareness with both Zendaya at 147.3M and Timothee Chalamet at 15.4M, who are off-the-charts in terms of fan engagement on their carefully timed posts of trailers, posters, and red carpet moments in the range of 2-7M likes per post,” says RelishMix.

“Impressively for Zendaya, while she has significant fashion deals, she still supports her film projects across her social network. Dune reunites Villeneuve with Dave Bautista at 15.1M after their journey in Blade Runner 2049. Also activated are Jason Momoa at 16.1M, Josh Brolin at 3M, Rebecca Ferguson at 402K and David Dastmalchian at 298K. Villeneuve is non-social,” adds the social media analytics corp.

Dune demands to be seen in a theater, and 50% of the pic’s business came from Imax, Dolby Cinema, PLF, D-box and 3D. Imax theaters alone delivered $9M from 404 screens, a 22.5% marketshare of the pic’s B.O. this weekend, one of the biggest shares for the large format exhibitor.

And in a great result for arthouses, The French Dispatch from Wes Anderson scored the best theater average during the pandemic with $25K or $1.3M at 52 theaters in 14 markets. The theater average bests that of such event titles, Venom 2 at $21.3K per theater and Black Widow at $19.4K per theater. The movie, which made its world premiere at the Cannes Film Festival, expands to 600 theaters in 60 markets next weekend.

“The French Dispatch is a jolt of electricity for the specialty box office, delivering record-breaking results in theaters across the country,” said Searchlight Pictures’ SVP-General Sales Manager Frank Rodriguez in a statement. “These figures show that after a year and a half, arthouse and independent theaters have a superhero of their own in Wes Anderson. What has been doubly encouraging is the crossover results in mainstream theaters hungry for Wes’ 10th film as well.   We are thrilled that after several delays, moviegoers said it was worth the wait.”

Canada also saw an incredible turnout, particularly in the Varsity in Toronto  ($29K first two days) and the Park in Vancouver ($22K). In polling, 83% of the audience considered themselves Anderson fans, higher than any number seen for The Grand Budapest Hotel and Isle of Dogs according to Searchlight.

Other takeaways from this weekend: Disney/20th Century Studios/Locksmith’s Ron’s Gone Wrong lived up to its title’s name at the weekend box office with an awful $7.3M. I mean, family movies that were purely theatrical and on PVOD day-and-date during the pandemic like Paw Patrol, Addams Family 2, and The Boss Baby: Family Business (day and date Peacock) and Space Jam 2 (day-date HBO Max) did substantially more business. Look for the great return of families at Thanksgiving with Disney Animation’s Encanto.

Also, many are in my ear about the -71% drop off of Halloween Kills in weekend 2, with $14.5M. Sure, we can blame some Peacock here. But I think the majority of the decline rests on the fact that the movie is a horror film, and everyone that needed to see it saw it opening weekend, and that B- CinemaScore screams that there was no reason to see it again, or even venture out to see the sequel in weekend 2. Not when you have a spectacle like Dune in the marketplace.