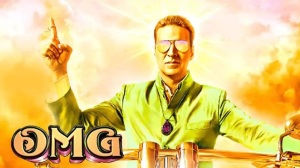 Akshay Kumar who essayed the role of Lord Krishna in the 2012 film OMG co-starring Paresh Rawal is all set to return to his Godly avatar for the sequel of the film. The actor has begun shooting for the film and announced the same with his first look poster from the film.

Akshay Kumar will be seen playing Lord Shiva in the film. In the poster, Akshay is seen sporting long hair with blue skin, resembling Lord Shiva.

‘कर्ता करे न कर सके शिव करे सो होय ..’ 🙏🏻
Need your blessings and wishes for #OMG2, our honest and humble attempt to reflect on an important social issue. May the eternal energy of Adiyogi bless us through this journey. हर हर महादेव@TripathiiPankaj @yamigautam @AmitBrai pic.twitter.com/VgRZMVzoDy

OMG 2 is written and directed by Amit Rai and produced by Cape of Good Films, Vipul D Shah, Rajesh Bahl, and Ashwin Varde.