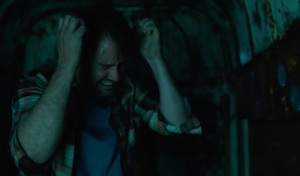 Just as the ghouls and goblins are about to take the stage for their night of fun, Epix has released a trailer for their new horror series From. While the trailer only offers a glimpse of what the show will deliver, it’s one of the most terrifying and claustrophobic thirty seconds that you will see today.

From is created and executive produced by John Griffin, whose first feature film Crater is set to arrive sometime next year. Jack Bender (Lost, Game of Thrones) will serve as director for the first four episodes and as an executive producer, alongside Jeff Pinker (Lost, Alias).

From boasts an impressive cast lead by former Lost star Harold Perrineau, as Boyd Stevens – the town’s local sheriff whose laws have held this small town together. From centers around a town in middle America that traps all that enter it. The reluctant townsfolk, led by Perrineau, fight to their best to keep a semblance of normalcy while also searching for a way out of the nightmarish town. But townsfolk beware, for when the sun goes down and the darkness creeps in, so too do the terrifying creatures that live in the nearby forest.

From will be released on the Epix channel and app on February 20th. Check out the teaser trailer for From below.

The official synopsis is:

The series unravels the mystery of a nightmarish town in middle America that traps all those who enter. As the unwilling residents fight to keep a sense of normalcy and search for a way out, they must also survive the threats of the surrounding forest – including the terrifying creatures that come out when the sun goes down.