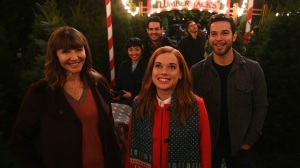 It’s time to deck the halls, because Zoey’s Extraordinary Playlist‘s new TV movie Zoey’s Extraordinary Christmas is on its way with an official first-look trailer! Last summer it was announced that the series would be canceled at NBC after two seasons, but not long after fans were treated with the news that the series would be given a Christmas TV movie at Roku!

Zoey’s Extraordinary Playlist follows the story of a young woman (Jane Levy) who discovers she has the ability to hear the inner thoughts of the people around her as songs and musical numbers. The series also stars Mary Steenburgen, Skylar Astin, Alex Newell, and Peter Gallagher. Zoey’s Extraordinary Christmas will follow Zoey (Levy) on her first holiday after her father’s (Gallagher) passing as she attempts to create a magical Christmas for her family just like he used to.

The first look sees Zoey (Levy) and her friend Mo (Newell) doing some holiday shopping as Mo and the other shoppers in the mall give a rendition of Andy Williams’ classic Christmas song, “It’s the Most Wonderful Time of the Year.”

Of the special, series creator Austin Winsberg said the following:

“It was a true honor and a thrill to bring this amazingly talented group of people back together again to make Zoey’s Extraordinary Christmas. This movie never would have happened if it wasn’t for the incredible outpouring of love and support from the fans. It really is a Christmas gift for all of us. I am so grateful to The Roku Channel for believing in the whole Zoey’s team and for allowing us to continue to tell this story.”

Check out the first look below and be sure to stay tuned to Collider for any more updates on Zoey’s Extraordinary Christmas: