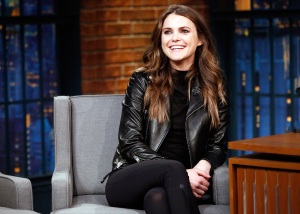 Extrapolations, the climate change anthology series that will be coming to Apple TV+, has added even more stars to its cast. Today, it was announced that Edward Norton, Indira Varma, Keri Russell, Cherry Jones, and Michael Gandolfini will be joining the cast of this Scott Z. Burns show, Variety reports.

Norton, who is well known for roles in Moonrise Kingdom, American History X, and Fight Club, will play a scientist named Jonathan Chopin. Playing the role of Jonathan’s son, Rowan Chopin, will be Gandolfini, who is most recently known for his starring role in The Many Saints of Newark, where he played a young Tony Soprano, a role made famous by his father James Gandolfini on The Sopranos.

Varma will portray an inventor named Gita Mishra. Varma has played Ellaria on Game of Thrones, and Piety Breakspear in Carnival Row. Russell, known for her starring roles in The Americans and Felicity, will play Olivia Drew, a gun for hire — a role we are sure Russell will absolutely crush. Jones, known for her performances in The Village and more recently The Eyes of Tammy Faye, will portray the president of the United States, Elizabeth Burdick.

The new list of cast members comes hot on the heels of the original announcement that Meryl Streep, Sienna Miller, Kit Harrington, Tahar Rahim, Matthew Rhys, Daveed Diggs, Gemma Chan, David Schwimmer, and Adarsh Gourav would be the leading stars in the series. Extrapolations will take 8 interconnected episodes to delve into how impending changes to the planet will ultimately affect every aspect of the way people experience life in ways such as love, faith, work, and family.

We don’t know yet what Streep’s role will be in the series, but we do know about the others. Miller will play a marine biologist named Rebecca Shearer, Harrington will portray CEO Nick Bilton who will be the head of an industrial behemoth, Rahim will play Ezra Haddad who is a man struggling with memory loss, while Rhys will portray Junior, a real estate developer.

Diggs will take over the part of Marshall Zucher, a rabbi in South Florida, Chan will play Natasha Alper, a single mother and micro-finance banker, and Schwimmer will play Harris Goldblatt. All we know about Schwimmer’s character is that he is a man with a teenage daughter. Gourav will play a driver for hire ironically named Gaurav.

The series sounds like it will tie everyone together by the end as they all grapple with the constant changes in climate and what that means for their own lives. Extrapolations does not yet have a release date.