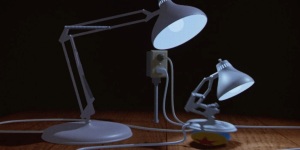 The word automaton is defined as “a moving mechanical device made in imitation of a human being”. Anyone who has gone to a theme park with working animatronics has seen an automaton in action, either to laughable or amazing effect. In this latest short, a group of Pixar animators led by Krzysztof Rost is credited as the director of the short. Pixar describes the short as:

Pixar Animation Studios is proud to present “Automaton.” A poetic interlude between a reality and an abstraction, this experimental short was produced by artists from Pixar’s Effects team, working in collaboration to create a startlingly original piece of filmmaking.

While Pixar has been known to take their audiences to breathe away, starting back in 1982 with the “Genisis Effect” sequence in Star Trek II: The Wrath Of Khan, there hasn’t been anything quite like this. The short begins looking top-down on a section of dirt. The uneven surface looks as though someone had taken a photo and snuck it into the edit. The image then moves forward and we come upon a field of tall grass swaying in the wind. This is one of the most stunning effects ever committed to film as it looks absolutely photorealistic.

Rost has given an interview to SideFx last year where he credited the inspiration for Automaton to directors like Terence Malick and Michelangelo Antonioni. He mentioned that what we found intriguing about their directing styles was “the poetry of how they show a story to the audience. In their films, shots of landscapes of natural phenomena create this transcendental juxtaposition with human protagonists, almost spiritual experience.” When speaking of Automaton Rost said:

“For my short story, I wanted the main character to be a reality, a nature at its purest and seek out the hidden mystery behind its power of never ending process of destruction and creation, thus Automaton.”

Automaton is truly a gorgeous piece of animation and stands as a signal from Pixar that there is plenty more where that came from. You can watch Automaton below: