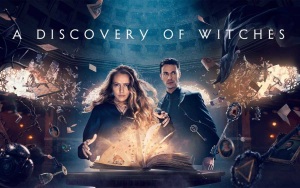 Sundance Now, Shudder, and AMC+ have announced the release date for Season 3 of A Discovery of Witches while also releasing a new trailer showcasing the latest trials for the witch/vampire couple. It seems as if the magical world is not done with the two of them yet, even as they try to settle down peacefully.

The new season is set to air on all three platforms in the U.S. on January 8. The epic conclusion to the fantasy saga finds Matthew and Diana returning from 1590 to the present day and combatting what they left behind. Diana is currently pregnant, painting a target on the backs of the couple as they take one last stand against the magical world that is trying to separate them once again.

The third season is based on The Book of Life from Deborah Harkness’s bestselling All Souls trilogy and is the third and final installment of the series. The show is a Sky Original series and was commissioned by Zai Bennett, Managing Director of Content, Sky UK. Kara Manley acts as the executive producer for Sky Studios and the show is being made with Bad Wolf. Executive Producers for Bad Wolf are Lachlan MacKinnon, Jane Tranter, Deborah Harkness, Lisa Holdsworth, and Helen Raynor.

A Discovery of Witches has been an action-packed ride with romance, magic, and drama at every turn. This conclusion will not only decide the ending for Diana and Matthew’s stories but the stories of those who have helped and hurt them along the way. Season 3 of A Discovery of Witches will air January 8, 2022 on Sundance Now, Shudder, and AMC+. Check out the trailer below: