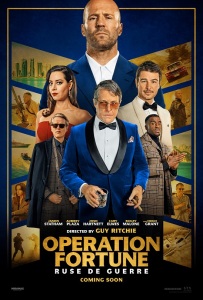 Director Guy Ritchie has quietly made himself quite the career over the last 2 decades in Hollywood. With such classic films as Snatch and Lock, Stock and Two Smoking Barrels, the director has been a very influential part of modern action filmmaking. Coming off this year’s severely underrated heist movie Wrath of Man starring Jason Statham, Ritchie is reteaming with the actor for the fifth time for next year’s spy film Operation Fortune: Ruse de guerre, and we now have our first look at the movie courtesy of some new images.

The images showcase the film’s insanely talented cast, along with Statham, in an array of elaborate attires that invoke classic-feeling spy adventures with a Ritchie twist. The ensemble, which features Josh Hartnett, Hugh Grant, Cary Elwes, and Aubrey Plaza, clearly knows how to strike a pose. Statham is not the only Ritchie regular here either, as Grant and Hartnett have also starred in previous films of the director’s.

However, the most interesting addition to the cast is Plaza, who is mainly known as a comedic actor for her work on such shows as Parks and Recreation. She has branched out her career as of late with the 2019 remake of Child’s Play being an example, but this film serves as her first real venture into the action spy genre.

Along with the new images, Ritchie himself released a new poster that catches your attention with its very striking blue and gold presentation. The cast simply pops in their over-the-top colorful costumes and scenes that tease the action of the upcoming spy thriller can be seen in the background filtered in a treasured gold.

Ever since his live-action remake of Disney’s Aladdin, Ritchie has gone back to the unique fast-paced energy that made him a household name in the first place, and hopefully, this film continues his newfound return to form. Given that the script was written by Ritchie and long-time collaborators Ivan Atkinson and Marn Davies, all signs point to this being the case.

Operation Fortune: Ruse de guerre releases in theaters in 2022. Check out the images below:

Operation Fortune. Trailer drops Thursday. That’s all I got. pic.twitter.com/auZLnYMose